Izmir or Smyrna is the third largest and populous city of Turkey. It is also the second port of the country after Istambul. This great city is the capital of the Izmir province and has around 26495832 inhabitants; it is located at the shores of the Aegean Sea.

Izmir has an important and rich history. The zone that occupies the city has been inhabited since 3500 years ago; therefore the entire province has many archeological treasures such as the Zeus altar or the rests of the ancient city of Ephesus (near the actual Selçuk town to 70 kilometers of Izmir) where it was the famous Temple of Artemis, which was considered one of the Seven Wonders of the Ancient World, whose remains can be still seen.

Besides, in the ancient Ephesus it was also the last house of the Virgin Mary and other important buildings of the ancient times like the Agora, the Gate of Heracles, the Great Theather, the Temple of Athena or the Odeion. 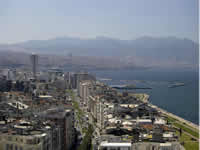 According to the legend the famous poet Homer was born and lived here. Around 600 BC the city was invaded by Lydians and later by Persians who destroyed the city in 545 BC. Nevertheless the city was re-founded by Alexander the Great about 300 BC.

During the Roman time Smyrna reached another splendor period, which lasted until 178 AD when a great earthquake razed the city. Nevertheless Smyrna was reconstructed and it became an important city within the Eastern Roman Empire.

In the XI century the city was captured by Turks who used Smyrna as a naval base but it was recaptured by Byzantine Empire in 1102. Later the city was took by Ottoman who controlled the city until the World War I in the XX century, when Ottoman were defeated, the region was controlled by Greek but after a bloody war the Turkish army recovered the Anatolia region; therefore Izmir is now part of Turkey.

In addition to the archeological places and the excellent museums, Izmir enjoys a mild climate during almost all the year with maximum average temperatures between 28 and 32 ºC. There are several beautiful beaches surrounded by olive groves, rocky crags and pine woods, in addition to the zone of Balcova has the Turkish largest spas.

Therefore, it is one of the main tourist destinations of Turkey and is called the Pearl of the Aegean. But, Izmir is also an important commercial and industrial center; besides every year during June and July the city is seat of the International Art Festival, during this festivals many great figures of the international show business like Ray Charles, Bryan Adams, Jethro Tull, New York Ballet amongst other have given recitals and performances.

In August and September Izmir host the International Fair, a great event with many trade fairs, exhibition, congress, open-air theatres, painting, sculptures and much more.