This wonder of the ancient world is also known as the Temple of Diana. The temple was located in Ephesus an ancient Greek city around 50 Km from the actual city of Izmir in the territory that today occupies Turkey.

The temple was dedicated to Artemis the Greek goddess, the virginal huntress and twin of Apollo, who occupied the place of Titan Selene as Goddess of the Moon.

This deity was passionately venerated as an archaic pre-Hellenic icon. The original statue that represented to Artemis was carved in wood. The statue had many breasts which denoted her fertility, rather than the virginity that Hellenic Artemis assumed.

The Greek Artemis was a little different from the Artemis that was adored in Ephesus. The Ephesus’s goddess was a deity of the fertility; whereas the Greek Artemis was traditionally the goddess of the hunt. Therefore, it believes that the cult to the Artemis of Ephesus began several centuries before the Hellenic period. Probably the worship to Artemis derived from the ancient worship that Ephesians gave to Cybele.

The temple was built, destroyed and reconstructed many times since Bronze Age. But the temple that was listed as one of the Seven Wonders of the World was a project of 120 years which was started by Croesus of Lydia.

Antipater of Sidon described the temple using the following words: “I have set eyes on the wall of lofty Babylon on which is a road for chariots, and the statue of Zeus by the Alpheus, and the hanging gardens, and the colossus of the Sun, and the huge labour of the high pyramids, and the vast tomb of Mausolus; but when I saw the house of Artemis that mounted to the clouds, those other marvels lost their brilliancy, and I said, Lo, apart from Olympus, the Sun never looked on aught (anything) so grand”.

Pliny was who described the temple with more detail. According to his description the temple was 377 feet (115 m) long and 180 feet (55m) wide, with an area three times as large the Parthenon in Athens.

It was made mainly of marble and was enclosed in colonnades of 127 Ionics columns, each column was 60 feet (18 m) height. The temple was always surrounded by priests and priestesses, musicians, dancers and acrobats.

The sacred shrine of Artemis was very old and it was an important religious centre many centuries before the temple that was considered one of the wonders was built. There are ancient Greek stories which attributed the origin of the worship to Artemis in Ephesus to the legendary Amazons. Archeological excavations realized before World War I discovered three successive temples overlying one another on the site.

However, the construction of temple which was listed as one of the wonders was started around 550 BC, by the Cretan architect Chersiphron and his son by order of the King of Lydia Croesus. A new statue of the goddess was sculpted by Endoios as well as a naiskos (a small temple with columns or pillars and a triangular structure named pediment above the horizontal structure) to house the goddess. 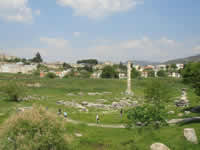 The temple had more than 1000 items of cult like sculptures of famous artists such as Polyclitus, Pheidias, Phradmon and Cresilas. Most sculptures represented Amazons who according the legend founded Ephesus.

Today, some fragments of the bas-reliefs that ornamented the amazing columns of the temple are preserved in the British Museum. Because of its location at an important economically zone, the temple was since ancient times a tourist attraction, visited by pilgrims, merchants, kings, who offered to the goddess jewelry and other goods.

According to the story, the temple was destroyed on July 21 356 BC by Herostratus who realized this barbarian act finding fame at any cost. According the legend the same night that the temple was burned, Alexander the Great was born. Plutarch said that Artemis was too preoccupied with Alexander’s delivery to save her temple. Therefore, Alexander offered to rebuild the temple, but Ephesians refused. Nevertheless, after Alexander’s death the temple was restored in 323 BC.

The temple was destroyed again by Goths in 262 but Ephesians rebuild the temple again. According the biblical book Acts of John (II century), the apostle prayed publicly in the Temple of Artemis exorcising its demons and “of a sudden the altar of Artemis split in many pieces… and half the temple fell down” instantly many Ephesians became Christians.

By IV century, most Ephesians were Christians and in 391 all pagan temples were closed by order of Roman Emperor Theodosius. Finally the temple was destroyed in 401 by a group of people leaded by St. John Chrysostom. Most stones of the temple were used to build other buildings like the famous Hagia Sophia.

The temple’s site was rediscovered in 1869 thanks to an archaeological expedition sponsored by the British Museum. At the beginning of the XX century, some fragments of sculpture from the IV century were found, which have been used to rebuild an image of the temple in the “Ephesus Room” of the British Museum. In the ancient location of the temple now only there is a single column constructed with several fragments found on the site.