Ely Cathedral is known as “the ship of the Fens” because of its prominent shape that towers above the surrounding flat and watery landscape. It is located in the Cambridgeshire County of England and boasts one of the most amazing engineering feats of the Middle Ages with the unique form of its Octagon Tower.

Simeon, a kinsman of William the Conqueror was named Abbot of Ely after the Norman invasion; he began rebuilding it in 1083, creating one of the best examples of Romanesque architecture in England.

Alan of Walsingham had to design a central tower that seems to float unsupported above the crossing of Ely Cathedral like a cloud when the tower collapsed in the early 14th century. In the Victorian period the beams of Alan were carefully restored by Sir Gilbert Scott who added restrained restoration work to the interior.

One of the premier Saxon churches in England along Glastonbury and Canterbury. Actually the lantern tower is formed by a series of massive oak beams which rise to a height of 63 ft. It is supported by diagonal oak beams resting upon stone pillars which support a total weight of 400 tons of wood and lead.

The story about Ely Cathedral begins with the St. Etheldreda’s life in Saxon Times. Daughter of Anna, king of East Anglia, she was born probably in Exning, near Newmarket in Suffolk. Around 652 she was married at an early age with Tondberht, ealdorman of the South Gyrwas but in 655 he died and she remained virgin. After that she retired to her dowry, the Isle of Ely.

Five years later for political reasons she was married with Egfrith, the young king of Northumbria who was several years younger than her. At the beginning he accepted that she going to remain a virgin, but 12 years later he wished their marital relationship was normal. Etheldreda refused to her young husband with the advice and aid of Wilfred, bishop of Northumbria.

In spite of the bribes in vain offered by Egfrith, she left him and became in a nun at Coldingham under her aunt Ebbe and also she founded a double monastery at Ely in 673. 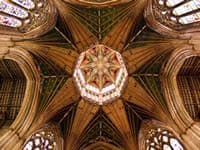 An old church at Ely destroyed by Penda, pagan king of the Mercians was restored by Etheldreda and on the site she built a monastery which became the richest abbey in England. The monastery flourished for 200 years until it was destroyed by the Danes and it was refunded as a Benedictine community in 970.

The result of the plague which also killed several of her nuns, killed to Etheldreda around 680 with a tumour on the neck. 17 years after her death her body was found to be incorrupt and the linen cloths in which her body was wrapped were as fresh as the day she had been buried. So the body was placed in a stone sarcophagus of Roman origin found at Grantchester and reburied.

For centuries, the shrine was the focus for vast numbers of medieval pilgrims, but it was destroyed in 1541 in spite of that, a slate in the Cathedral marks the spot where it stood.

A third major restoration project, the most extensive to date, was begun in 1986 and was completed in the year 2000. The Etheldreda Banner was made by Miss Yams of Bayswater in 1910 and is still used today during great processions at Ely Cathedral.

It depicts Saint Etheldreda with a crosier as first Abbess of Ely, and around her, are the coats of arms of the See (top left), the University of Cambridge (bottom left), the Dean and Chapter of Ely (top right), and the Borough (now City) of Cambridge (bottom right); the arms at the top are those of Frederick Henry Chase, Bishop of Ely 1905-1924.

The cathedral looks out over an amazing green space. Its great window is visible on the north as well. The south side contains one of the largest surviving collections of medieval monastic buildings in England. Inside of it, the fine Norman nave built from east to west begins in 1100 and completed around 1139. Some architectural development over those four decades is visible: the shape in the arches is square until the sixth bay and rounded in subsequent bays.

The floor and ceiling are Victorian, around 1869 the pavement replaced rough stones, the wooden ceiling was painted by Henry Styleman le Strange and his friend Thomas Gambier Parry, two gifted amateurs. Off the south aisle of the nave is the Prior’s Door, which has a magnificent example of 12th century Romanesque carvings. Near to the Prior’s Door is Ovin’s stone, the oldest artefact in the cathedral. The inscription reads “To Ovin – give your light, O Lord and rest. Amen.”

The lantern’s construction took 14 years to finish it. By 1340 the roof was covered in lead and the ceiling was carved and painted. The wooden stalls in the octagon area were designed by George Pace in 1978. Above the pulpit is a modern sculpture of Christ in Majesty by Peter Eugene Ball.

The choir consists of two different periods of construction due to its styles. The first three bays are in decorated style of Gothic architecture. The six remaining bays are in the simpler Early English Gothic style. The choir stalls include many fascinating medieval carvings on the misericords. The canopies depict Old Testament biblical scenes on the south and New Testament biblical scenes on the north.

The Bishop Alcock’s chantry chapel is considered one of the finest examples of Gothic architecture in England, with ornate stonework carved from chalky Cambridgeshire stone and a fan-vaulted ceiling. The statues which once filled the niches were destroyed at the Reformation.

The Lady Chapel was built from 1321 to 1349, it once looked much different than it does today. The walls were bursting with colourful paintings, the windows were filled with the finest medieval stained glass, and the niches were home to exquisite statues. But all was destroyed, but even the badly damaged state it provides an idea of what it must have looked like.

The chapel became a parish church after the Reformation, but was returned to the cathedral in 1938. The unusual sculpture of the Virgin Mary that stands above the altar is by David Wynne (2000). Housed in the south triforium near the main entrance at the west end is a Stained Glass Museum, which displays examples of stained glass from 1240 to the present day.