Do you think you could make decisions that shape a whole nation?

A visit to the Houses of Parliament, and the very famous and immediately recognisable clock tower standing alongside it, is the place to go to see how this happens in the UK.

Located in the Palace of Westminster, the home of the UK’s government is one of London’s most recognisable landmarks and stands directly on the bank of the river Thames.

What Are The Houses of Parliament?

The Houses of Parliament are the two houses that make up the UK parliamentary system, namely the House of Commons and the House of Lords.

This is called a bicameral parliament where each house keeps the other in check and this allows laws to be made, debates to be had, allocation of funding and taxes and ensure the workings of the government are monitored.

A Brief History of The Houses of Parliament

There have been buildings of significance on the site of the Palace of Westminster since the 8th century when there was a Saxon church in situ. This was known as the West Minster (or ‘West Monastery’) where the current name was derived.

In the 10th Century this was changed into a Benedictine Monastery and then in 1016 a Royal residence was built by the Danish, Norwegian and English King, Canute (Cnut).

In 1097, Westminster Hall was built by King William II, the son of William the Conqueror, which is one of the few early features that is still present today.

Over the next few hundred years there was a gradual move of financial aspects by the Monarchy from Winchester to Westminster with both the Treasury and the Exchequer moving sites. There was gradual development of the Palace by subsequent monarchs with the additions of other parts of the building. It was first recorded that Parliament was opened here in 1259 in the Painted Chamber (the King’s private apartment).

In 1605 the infamous Guy Fawkes tried, and failed, to blow up the Houses of Parliament in protest of laws against Catholicism. This became known as the Gunpowder Plot. Guy Fawkes was tried, convicted of treason, and sentenced to death in Old Palace Yard within the grounds of the Palace of Westminster.

1834 saw a fire at the Palace that destroyed the majority of the building - those parts that survived this were Westminster Hall, Undercroft Chapel, The Cloisters and Chapter House of St. Stephen’s and the Jewel Tower.

The rebuilding of the Palace following this devastation led to the building that we now see today. A competition was held to design a new building and this was won by Christopher Barry, helped by Augustus Pugin. The new building was built in a perpendicular Gothic style and the building work started in 1840 and finished in the 1870s.

During World War II the Palace was damaged in fourteen different air raids which caused considerable damage to the building, with the House of Commons chamber being completely destroyed in May 1941.

The Palace of Westminster today is classed as a Grade I listed building and also a UNESCO World Heritage site.

The modern Palace of Westminster building is nearly 300metres long and covers 8 acres along with a surrounding 4 acres of gardens and lawns.

There are approximately 1100 rooms within the Palace, connected by around 4.8km of passageways.

Since the fire in 1834 there are only a few of the medieval parts of the Palace still remaining. These are:

After the fire in 1834 and the subsequent rebuilding of the Palace of Westminster, there are many other parts of the building worthy of note;

The Elizabeth Tower (aka Big Ben) 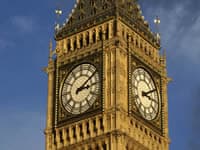 The tower at the north of the Palace is often referred to as Big Ben, and even previously as St Stephen’s tower before the official changing of it’s name in 2012. The tower is over 96 metres high with 334 steps to reach the top.

There are five bells in the tower with the largest being called Big Ben weighing in at 13.7 tonnes whilst the other four smaller bells range from 1.1 tonnes to 4 tonnes. Big Ben chimes on the hour, every hour and the four smaller quarter bells sound every 15 minutes.

The four clock dials on the faces of the tower are 7metres in diameter with the hour and minute hands being made out of different materials - hour hands from gun metal and the minute hands from copper.

This chamber is the most extravagantly decorated room within the Palace and is the place where the gathering of the three parts of Parliament - the Monarchy, the Lords and the Commons - takes place. The main colour scheme in the chamber is red and there are many decorative aspects including heavy brass gates at the entrance.

A peculiar feature is the presence of the Woolsack which is nowadays stuffed with wool from all over the Commonwealth and this is the seat of the Lord Speaker!

Much less lavish than the House of Lords with the colour scheme based on green. The benches where the Members sit are split into two sides, facing each other with the Speaker’s chair between the sets of benches at one end of the chamber under the public gallery.

Prior to the Queen entering the House of Lords, she dons her ceremonial state robes and the Imperial State Crown. Within the decorative room there is the 19th century Chair of State for her use should she wish to have a rest prior to entering the house!

This is the crossroads of the house where members from both houses can meet. Above the lobby is Central Tower and the lobby itself forms a tall octagon with a tiled floor and arches depicting the patron saints of the four constituent countries of the UK.

Fun Facts About The Houses of Parliament

The Houses of Parliament is open to visitors and there are several different tour options available.

Tour Along With Afternoon Tea

Tactile Tours For The Blind And Partially Sighted

How To Book Houses of Parliament Tours

The ticket office is located in front of Portcullis House on Victoria Embankment, SW1A 2LW.

Tactile Tours, Private Guided tours, Royalty and Splendour group tours and Contemporary portraiture group tours can be booked via the above telephone number or by email on [email protected]

Disabled Provision and Access to the Houses of Parliament

Debates And Question Time Within The House

The Houses of Parliament is the working seat of government in the United Kingdom, and it is possible for visitors to view certain events live, in person.

The Houses of Parliament are situated on the north bank (where Westminster bridge connects to the north shore) of the River Thames located in the City of Westminster in central London, UK.

Westminster Abbey is to the west of the House while St Thomas’ hospital sits across the river to the east. Abingdon Street runs along the west side of the buildings and Westminster Bridge road to the north.

How To Get There

The Houses of Parliament can be accessed in a number of ways due to its central location.

By Boat - Westminster Pier on Victoria Embankment is only a 5 minute walk away which allows access to a number of boat excursion companies that can take you along the River Thames.

By Train - The nearest mainline overland train stations are Charing Cross (15minutes), Waterloo (16 minutes) and Victoria (20minutes) which take you out of the City and to many parts of the UK.

By Car - Driving in central London is not recommended due to lack of, and price of, parking and also due to the congestion charge which applies to vehicles entering this central zone. However if necessary to drive, the nearest car park to the Houses of Parliament is Q-Park Westminster located off Great College Street in Abingdon Street Gardens (SW1P 3RX).

Due to the location of the Houses of Parliament there are numerous options for accommodation in the central London vicinity. From hostels and budget hotel options all the way through to five star luxury, there are many places to stay.

Other Things To Do Nearby

Central London, by it’s nature as a capital city, has many attractions to see and things to do. Just a few of the many options available in the vicinity of the Houses of Parliament are:

What are the two Houses of Parliament in the UK?

Who owns the Houses of Parliament?

Can you go into the Houses of Parliament?

Yes, you are able to go into the Houses of Parliament. There are a number of different tours available from individual audio tours to private guided tours. Also visitors are able to see debates and questions to ministers within the chambers themselves when Parliament is in session.

What happens if you die in the Houses of Parliament?

The question regarding dying in Parliament stems from an idea that anyone who dies within a royal palace (in this case the Palace of Westminster) would be entitled to a State Funeral. This however is not true - there have been at least four deaths within the palace grounds (including Guy Fawkes) and none of these people have been granted a state funeral.

How old are the Houses of Parliament?

Why is the Queen not allowed in the House of Commons?

There is thought that the bell called Big Ben was nick-named as such in the 19th century after a Welsh civil engineer Sir Benjamin Hall. Sir Hall was the Commissioner of Works overseeing the renovation of the Houses of Parliament and the installation of the bell itself. The alternative theory is that the bell is named after Benjamin Caunt who was a 19th century heavyweight bare-knuckle boxing champion whose nickname was ‘Big Ben’.

How many rooms are in the Houses of Parliament?

There are over 1100 rooms contained within the Palace of Westminster where the Houses of Parliament reside.

How many times does Big Ben chime a day?

The bell named Big Ben chimes on the hour, every hour so therefore 24 times a day. There are four smaller quarter bells within the tower that sound every 15 minutes.

How loud is Big Ben?

The bell Big Ben is very loud indeed! It has been measured at 118 decibels (to compare, jet planes taking off register at 120 decibels) and can cause damage to hearing.

How tall is Big Ben?

The bell of Big Ben is 2.29m tall with a diameter of 2.74m. However the name Big Ben is also sometimes used to refer to the clock tower (The Elizabeth Tower) and this is 96 metres tall.