The construction has been estimated more than thirty million hours of labors. As mysterious as old, it has long puzzled archaeologists; no one knows why it was constructed, although it’s believed to have been started about 3100 B.C and spanning several centuries.

Stonehenge is a medieval term meaning “hanging stones”. Multi-ton stones were brought to Salisbury Plain from great distances. Experts speculate that stone could have been put on rafts, transported by water and dragged on rollers. Maybe 500 men, aided by ropes pull one of these stones.

Researchers suggested that Stonehenge was used as a place of worship, even as a location for human sacrifice, other consider that the stone formations were used as an observatory to predict the sun and moon’s position to the earth and determinate the seasons.

Today only half of the original monument survives, because over the centuries, people taken pieces of the stone for building materials and souvenirs, however Stonehenge is a popular tourist destination.

Stonehenge a Neolithic and Bronze Age megalithic monument in Wiltshire consider five theories about this amazing world medieval heritage. Although new research suggests that Stonehenge was originally used as a cemetery.

Mike Parker Pearson of the University of Sheffield, UK argues that Stonehenge was primarily a place for the dead, and must be treated as part of a greater complex of monuments in the surrounding area. Many human remains excavated from burial mounds nearby have shown signs of injury or illness, and chemical analysis of teeth revealed that they came from as far afield as Ireland, Wales and northern England, so that monument was a place of healing, probably people have the impression that they could cure them of their ailments.

Another theory supposes that it was an ancient observatory, used to mark midsummer, but other suggested that Stonehenge was used to predict solar and lunar eclipses.

Lionel Syms of the University of East London argues that the building marked a fundamental shift in society from hunting to agriculture, which corresponded with a shift from lunar to solar worship. In this case Stonehenge could have been used as a place of Moon worship. Ant the last theory suggested a UFO landing site, because of its claimed sightings in the area.

The complex was built in several construction phases spanning at least 3000 years, although there is evidence for activity both before and afterwards on the side, perhaps extending 6500 years more. 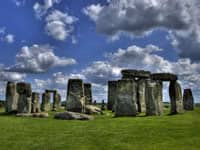 Before the monument, approximately 8000 BC forward some archaeologists found four large Mesolithic postholes beneath the modern tourist car-park. These held pine posts around 0.75 m were erected and left to rot in situ.

At this time, Salisbury Plain was still wooed but four thousand years later, a cursus monument was built 600 m north of the site as the first farmers began to clear the forest and exploit the area.

A circular bank and ditch enclosure measuring around 110 m in diameter with a large entrance to the north east and a smaller one to the south, was the first monument. Bones of deer and oxen in the bottom of the ditch was placed there by builders. In the second phase there is no longer visible, but the number of postholes increase with some form of timber structure, further standing of it were placed at the northeast entrance.

At least 25 of the Aubrey Holes contained cremation burials dating to the two centuries after the monument’s inception, and 30 further cremations were placed in the enclosure’s ditch and other points within the monument. Stonehenge is therefore interpreted as functioning as an enclosed cremation cemetery at this time.

Around 2600 BC, the archaeological excavations have indicated that timber was abandoned in favor of stone and two concentric holes were dug in the centre of the site. The bluestones consisting in dolerite, a holocrystine igneous rock were brought from glacial deposits carried down from the northern side of the Preselis to southern England by the Irish Sea Glacier. The Altar Stone may have stood as a single large monolith.

The widening of the north eastern entrance matched the direction of the midsummer sunrise and midwinter sunset of the period. The Heelstone tertiary sandstone cannot be securely dated and may have been erected outside the north eastern and may also have been installed at any time in phase 3. Other features loosely are the four Station Stones, two of which stood atop mounds. The mounds are known as “barrows” although they do not contain burials.

At the end of the 3rd millennium BC, 30 enormous Oligocene-Miocene sarsen stones brought from a quarry to the north of Stonehenge, on the Marlborough Downs. A total of 74 stones would have been needed to complete the circle, it would seem that the ring was left incomplete but some of the sarsens were removed from the site.

In one of the sarsens, known as stone 53, images of a “dagger” and 14 “axe-heads” have been recorded carved on it. So it’s difficult to date the images but recent lasers scanning work on the carvings, indicates that apparently are similar to later Bronze Age weapons.

Due to radiocarbon, a Stonehenge archer body was discovered in the outer ditch of the monument in 1978. The last known usage of Stonehenge was during the Iron Age. Roman coins and medieval artifacts were found in or around the monument but it is unknown if the monument was in continuous use throughout prehistory or beyond. The site was known by scholars during the middle Ages and since then it was been studied.

Stonehenge was produced by a culture with no written language, many aspect of it remain subject to debate, but a numerous theories some of them very colorful explain the origin of this beautiful monument. In other words, we don’t know, but half the fun of Stonehenge is the speculation.