Woodstock, a small town in Oxfordshire, England is a UNESCO World Heritage Site. It is located 13 km northwest of Oxford, 18.5 km southeast of Chipping Norton and 73 miles W.N.W of London.

On 15 June 1330, elder son of Edward III, also called Edward was born in Woodstock Manor and he was called as “Edward of Woodstock” according to his birthplace. Elizabeth I was kept a prisoner here when a princess, in the gatehouse of Woodstock Manor.

The name Woodstock is Anglo Saxon origin and stands for a clearing in the woods. The Domesday Book describes Woodstock as a royal forest. King Alfred and Ethelred the Unready were some of the famous residents in the area.

Henry I may have kept a menagerie in the park. Also Woodstock was the scene of King Henry II’s courtship of Rosamund Clifford. In 1179 the town market was established when King Henry II gave Woodstock a Royal charter. 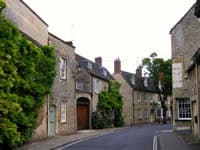 From the 16th century, the town prospered on manufacturing gloves. Nowadays it is largely dependent on tourists and many of whom visit Blenheim Palace.

During the 17th century, the town was altered greatly by the Duke of Marlborough; the local inn, the Bear, was capable of accommodating plenty of visitors and horses.

In 1554 Thomas Wyatt led an uprising to depose Queen Mary I and put Princess Elizabeth on the throne in her place. Due to poor condition of Woodstock Palace, Elizabeth was imprisoned in a lodge in Woodstock as a precaution. While imprisoned, she wrote a poem and it was released in April 1555 after nearly a year in captivity.

The town is divided into New and Old Woodstock by the little river Glyme which is in a steep and picturesque valley. Hensingham and Old Woodstock conforms two main suburbs in the town. After the designs of Sir William Chambers the town hall of Woodstock was built in 1766 with 17th century buildings in the centre. The almshouses were erected in 1798 by Caroline, duchess of Marlborough.

The primary school and the Marlborough School, the secondary school are situated along Shipton Road. The parish church, dedicated to St. Mary Magdalene, has a doorway of Norman origin. It features a musical clock which chimes every hour.

Fletcher’s House a large historic house in the centre of Woodstock houses the Oxfordshire Museum. The Oxford School of Drama is also found in Woodstock.

There is a football club, Old Woodstock Town, who were promoted to the Hellenic Football League Premier Division for the 2008-2009 season.