Blenheim Palace, a large and monumental country house, is situated in Woodstock, Oxfordshire, England. It is one of England’s largest houses and it was built between 1705 and circa 1724. In 1987, it was recognized by UNESCO World Heritage Site.

The exquisite Baroque Palace was designed by John Vanbrugh, in a heavy Italo-Corinthian style. This beautiful parkland with 2100 acres is surrounded by sweeping lawns, formal gardens and the magnificent Lake. Also it contains Fair Rosamund’s Well, near which stood her bower.

The Scale of the Palaces is beautifully balanced by the intricate detail and delicacy of the carvings, the hand painted ceilings and the amazing porcelain collections, tapestries and paintings displayed in each room.

But the greater part of the art treasures and curios were sold off in 1886, and the great library was collected by Charles Spencer, Earl of Sunderland.

The construction of Blenheim Palace was a gift from the grateful nation to the first Duke of Marlborough, in return for military triumph against the French and Bavarians in 1704. With an English baroque style, the palace is unique in its combined usage as a family home, mausoleum and national monument. 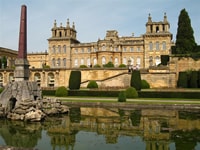 John Churchill, during the War of the Spanish Succession gained military renown and became a national hero and he was loaded with honors.

Thus, Queen Anne gave a great palace as a gift. In 1711, after a final quarrel, the money for the construction of Blenheim ceased and the Marlboroughs were forced into exile abroad.

The 4th Duke makes major changes to Palace Park and Gardens. The 5th Duke, a horticulturalist, developed extensive gardens. But these are now sadly lost except for the Rose Garden which was recently restored by the present Duke.

In particular the ladies have been concerned for the needy, the 4th Duchess built the almshouses in Woodstock and the wife of the 7th Duke worked tirelessly to help the starving in Ïreland and built the school in Bladon. The 8th Duke was an innovator; he introduced gas, electricity and central heating to the Palace.

The 9th Duke made a greatest impact on Blenheim who created the formal gardens to east and west of the Palace; also he restores of the Great Court and replanted the entrance avenue and the Grand Avenue. Also he was responsible for a complete redecoration of the State Rooms. He also added extensively to the collection at Blenheim particularly the furniture.

In the twentieth century during the both World Wars the dukes allowed Blenheim to be used in various ways for the war effort. The present Duke has committed his life to the preservation of this great house and it was during his time at Blenheim that the Palace became a World Heritage Site.

The plan of Blenheim Palace is basically that of a large central rectangular block, containing behind the southern facade the principal state apartments. On the east side are the suites of private apartments of the Duke and Duchess, on the west along the entire length is the long gallery originally conceived as a picture gallery.

The central block is flanked by two further service blocks around square courtyards. The east court contains the kitchens, laundry, and other domestic offices, the west court adjacent to the chapel the stables and indoor riding school. The three blocks together form the “Great Court” designed to overpower the visitor arriving at the palace. Vanbrugh creates a monumental effect used great masses of stone to imitate strength and create shadow as decoration.

The internal layout of the rooms of the central block at Blenheim was defined by the court etiquette of the day. State apartments were designed as an axis of rooms of increasing importance and public use, leading to the chief room. The larger houses, like Blenheim, had two sets of state apartments each mirroring each other.

The grandest and most public and important was the central saloon which served as the communal state dining room. Either side of the saloon are suites of state apartments, decreasing in importance but increasing in privacy which were intended only for use by the most important guests such as a visiting sovereign.

The palace was furnished with the many valuable artefacts the Duke had been given, or sequestered as the spoils of war, including a fine art collection.

The palace today remains the home of the Dukes of Marlborough — the present incumbent of the title being John George Vanderbilt Spencer-Churchill, 11th Duke of Marlborough. Like his forebears he lives for part of the year in the palace, with his family occupying the same suite of rooms as the 1st Duke and Duchess.

The palace is open to the public, and contains tourist attractions in the grounds, but the atmosphere is still that of a large country house. The progression from home to business has been essential to the palace’s survival in the 20th and 21st centuries.

Varied commercial concerns include a maze, adventure playground, mini-train, gift shops, butterfly house, fishing, and even bottles of Blenheim Natural Mineral Water. Concerts and festivals are also staged in the palace and park.