York is situated at the confluence of the rivers Ouse and Foss in North Yorkshire. The historic walled city is noted for its rich heritage and with its almost 2,000 year of existence has played an important role through out centuries.

Also is one of the two English ecclesiastical provinces, alongside that of Canterbury.

The language of the indigenous population is uncertain such as the toponymy of Eboracum, but probably the Britain inhabitants spoke a Celtic language, related to modern Welsh and the most widely accepted theory is that the Proto-Brythonic word: “Eborakon” meaning either “place of the yew trees”. 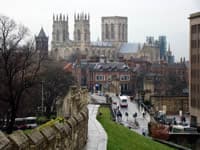 The city was founded as Eboracum in AD 71 by the Romans. When the Ninth Legion conquered to the hostiles Brigantes and constructed a military fortress (Castra) on flat ground about the River Ouse.

The fortress was rebuilt in stone and was inhabited by 6,000 soldiers. Much of this now lies under the foundations of York Minster, some of the original walls have been revealed in recent extractions in the Minster’s undercroft.

Historical figures as Constantine the Great became associated with the city during the Roman period. For two years the entire Roman Empire was governed from York by Septimius Severus which proclaimed the city as capital of Britannia Inferior.

In 627 the first Minster was built of wooden for the baptism of Edwin, years later he ordered that the church should be rebuilt in stone, but he was killed in 633 and the task of completing the stone Minster fell to his successor Oswald.

The Angles was moved in and the city was renamed Eoferwic. In 866 the city was captured by Vikings and again renamed as Jórvik covering much of Northern England and around 1000’s year the city became known as York. Under Viking rule the city became in a major river port, part of the extensive Viking trading routes throughout northern Europe.

In 1190, York was the site of an infamous pogrom of its Jewish inhabitants and the result was 150 Jews died. During Tudor times the city underwent a period of decline. Under Henry VIII, the Dissolution of the Monasteries saw the end of the many monastic houses York, along with their hospitals.

In 1688 the city’s role as the social and cultural centre for wealthy northerners was on the rise. Many elegant townhouses date from this period as the Lord Mayor’s Mansion House, Fairfax House, Assembly Rooms, the Theatre Royal and the Racecourse.

The railway was also instrumental in the expansion of the major employers in the city and with the increase of tourism as a major industry, the historic core of York became one of the city’s major asset and in 1968 it was designated a conservation area. From 1996, the city of York is a unitary authority area which includes rural areas too.

The best sites of interest are: York Minster, the second largest Gothic cathedral at the city’s centre; Clifford’s Tower, a stone quatrefoil keep built on top of a Norman motte, was the site of a Jews massacre; The Shambles is a narrow medieval street with shops, boutiques and tea rooms.

The city has many museums including the Castle Museum, Yorkshire Museum and Museum Gardens. The National Railway Museum is situated just beyond the station, and is home to a vast range of transport material and the largest collection of railway locomotives in the world.

Most of the remaining churches in York are from the medieval period. St. William’s College behind the Minster, and Bedern Hall, off Goodramgate, are former dwelling places of the canons of the Minster.