Calais is a town in northern France also is one of the six sub prefectures of the Pas de Calais Region. Although Calais is by far the largest city in Pas de Calais, the department’s Préfecture (capital) resides in its third largest city of Arras. Calais is less than 40km from Dover, the Channel’s shortest crossing and is by far the busiest French passenger port. The Channel Tunnel is located 6km west of the city.

Calais has been the traditional port linking the European continent to Britain since Medieval times. The old city was built on an artificial island enclosed by canals and harbours. Among the city’s fortifications, Risban Fort is at least 650 years old, the citadel dates from the 16th century, while the Nieulay Fort was constructed in the following century. 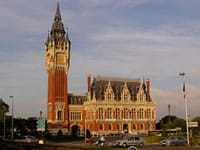 The strategic position of Calais on the English Channel assured that it would play important roles in the history of Western Europe. Napoleon had considered an invasion of England from Calais in 1798, but opted for Egypt instead. In 1940, Calais was a key objective of the invading German forces. The Nazis lost the Battle of England, and subsequently fortified the city heavily, fearing an Allied invasion from England.

Calais had its representatives sitting in the English Parliament. It came to be called the “brightest jewel in the English crown” owing to its great importance as the gateway for the tin, lead, cloth and wool trades.

Calais is designated as a HUB zone for economic development. Calais has a remarkable endowment of historic buildings and natural beauty. Port of Calais is the port mainly used for cross Channel links between Britain and the European mainland. Calais has worked to bolster its economy by revitalization of its downtown and development of an industrial park complete and undergoing a lot of development shops offices.

Calais has an architectural style in between that of south east England and Flanders. Like other towns in the Nord Pas de Calais, the first thing that most visitors will notice is the Hôtel de Ville (town hall) and its belfry, both built in the Flemish Renaissance style. Other attractions include the Bassin du Paradis (a natural harbour), the Neptune Port, the lighthouse of North Calais, the Louis-XVIII Column, and the sumptuous theatre of Calais.

Also the bell tower bears a similarity to Big Ben there is a nice garden to the front (watch tower, 38m high) and the Tudor-style Our Lady’s Church built mostly under the English rule. Just across the road is a park where a German bunker from the 1944 war as been turned into a museum.

In the centre of Calais is the market place of “Place d’Armes” dominated by the “Watch Tower”. Calais has a huge choice of shops. Many British visitors shopping in Calais, they choose from a mouth watering selection of chocolates, bread, cheese, designer label clothes, lingerie in chic boutiques, bargains of china, glass, linen, luggage, even DIY products and charcuterie in specialist shops..

Nowadays, ferries still make the journey between Calais and Dover. The cheapest way to get to Calais is by ferry from the UK. You can use the channel tunnel which is quicker but costs a lot more.