The Channel Tunnel also called the Euro Tunnel is a rail link under the English Channel between Cheriton near Folkestone, Kent, and Coquelles near Calais. The tunnel is one of the greatest civil engineering projects of the 20th century, has an ultimate design capacity of 600 trains per day each way.

The Channel Tunnel is 50 km (31 mi) long, out of which 39 km (24 mi) are undersea; it comprises two railway tunnels and a service tunnel. The two rail tunnels have 7.6 m in diameter, and the central tunnel has 4.8 m in diameter that is used for maintenance and ventilation, and if necessary, passengers could escape into it on foot in the event of an emergency on board a train. There are also several "cross-over" passages that allow trains to switch from one track to another.

The depth of the tunnels below the seabed averages about 45 m. The total number of track is 195 kilometers (120 miles), of which 45 kilometers (28 miles) outside the terminal in the United Kingdom and 50 km (31 miles) to the French terminal. The journey takes less than 30 minutes.

The French mining engineer Albert Mathieu Favier is credited with first suggesting a tunnel under the Channel, in 1802. Numerous other schemes emerged over the years. In 1875 the Channel Tunnel Company set up by the British engineer John Hawkshaw was given authority to build a tunnel by the governments of both Britain and France. In 1881 a new Act gave powers to a rival scheme promoted by Hawkshaw's former colleague William Low. 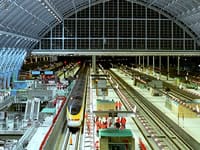 Trial tunnelling started but soon stopped because of concerns about military defense. Between 1882 and 1950 the British Parliament rejected ten Channel Tunnel bills, mostly for national security reasons. Tunnelling was revived in 1922 but soon abandoned again.

The present tunnel is based on a scheme drawn up in 1960 by the Channel Tunnel Study Group, alliance of British and French companies; Technical Studies, Inc. of the United States; and the Suez Canal Company. Work stopped in January 1975, after two access tunnels 740 m long had been dug. In the 1980s the construction company Tarmac took over from RTZ as prime mover behind the project.

In this year the Channel Tunnel suffered its first attempt, but the project was abandoned soon after and workings lay dormant for a hundred years. In November 1984 the two governments of France and the United Kingdom decided to support resumption and in April 1985 potential promoters were asked to submit schemes.

TML was a consortium of the British construction firms Tarmac, Wimpey, Costain, Balfour Beatty and Taylor Woodrow (Translink Contractors), with the French firms Bouygues, Dumez, Spie Batignolles, SAE, and SGE (Transmanche Construction). In October 1987, Eurotunnel, a private company, the company created by TML and its banks, was floated on the stock market. Eurotunnel became the client and TML its contractor. Eurotunnel gained 55 years concession in the work of high speed rail link between London and Paris.

Construction of the tunnels began in September 1987. Boring machines drove from the French and British coasts, both inland towards the terminals and out to sea. In 1988, international treaties were signed and once more excavation work began in earnest.

The two sections of the service tunnel were the first to link up, breaking through in December 1990. The tunnelling companies were Graham Fagg of the United Kingdom and Philippe Cozette of France, and they achieved a tunnelling rate of 426 m in one week. A total of 7 million tons of spoil was removed. At the peak of activity, 15,000 construction workers were on site and over seven years to complete.

The tunnel cost nearly $16 billion in United States dollars, more than twice the original cost estimates. The Chunnel was officially opened by Elizabeth II of the United Kingdom and French President Francois Mitterrand during a ceremony on May 6, 1994. Nearly 7 million passengers take the 35 minute journey travel through the tunnel every year. In its first six years of operation, 112 million passengers used the service.