Rome is the capital city of Italy, the country’s largest and most populous city. Located in the central western of the Italian peninsula, in the Lazio region on Tiber and Aniene River near the Mediterranean Sea, this ancient city was founded in the year 753 BC. 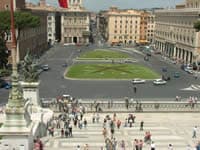 Rome is known as the World’s Capital, the Eternal City, and the Apostle’s threshold, the city of the seven hills or simply the City. For centuries Rome, the capital of Italy was the center of Western civilization; it also spawned the Baroque movement and seats the Catholic Church. That’s the reason that generates in visitors enough curiosity to look into galleries of the magnificent history of events and places of this majestic city.

Nevertheless to mention, the Vatican City a sovereign territory of the Holy See is an enclave of Rome and the Pope’s residence. Today Rome is a modern and cosmopolitan city, the third most visited tourist destination in Europe with a cultural and political importance.

Rome has hot and dry winters and warm and wet winters which means it has a Mediterranean climate. The best time to visit the city is September and October. Rome is full of entertainment and festivals in winter and spring is also a great time to come to this amazing place.

The city is famous by its developing industries in engineering, printing, textiles and food tuffs. Also is famous for its fashion and film industry. Some destinations that you must watch are: the Piazza della Repubblica and the Fountain of the Nayads, the Borghese Park, and the Vatican Museum with its spiral staircase. People love to take bus tour. The city is so beautiful that one can walk and see its beauty.

Maybe the best option to start a tour would be to concentrate on its architecture. The Ara Pacis altar represents the scenes Augustus, Agrippa, Julius and Tiberius. The St Mary Major Basilica is the only roman basilica which has retained its original shape. The Circo Massimo is still to be felt and appreciated.

The fountain Fontain di Trevi is the artistry of Bernini’s school. Into the most spectaculars pieces of artwork we can find the Colosseum, the Palazzo della Cancelleria, the Piazza di Spagna, the Piramide Cestia, the Stazione Termini, the Basilica di St Paolo, the Via Veneto, the Foro Romano, the Terme di Caracalla and the Vittoriano among others.

Some signatures of the past are still well preserved in the Rome museums with its true forms. Few to mention are the Egyptian Museum, the Chiaramonti Museum, Museum of Popes, the Tapestries gallery, the Maps gallery, Candelabra gallery, the Sobieski room, the Conception Immaculate room, the Vatican picture gallery, Gregorian museum of Profane art just to mention some of the most important.

Also Rome is house of 900 churches some of which are globally recognized for their holy being and sacred identity. Whether you are interested to have a religious tour, some basilicas not to miss are the San Giovanni in Laterano, San Pietro in Vatican, Santa Maria Maggiore, Madonna dei Monti and Santo Stefano Rotondo just to mention some of them.

The words can’t be enough to describe the place as to get an idea of the city. Nevertheless Rome always welcomes its visitor to be part of this wonderful history. Actually the City has all the modern facilities to make the stay and the tour pleasant, comfortable and safe. Certainly the bus system, the railways and the Rome metro are adding to the convenience of people on move across the city.

The combination of ancient culture and modern outlook is how Rome can be described and it can be appreciated for the efforts taken by the people to preserve this wonderful world paradise.