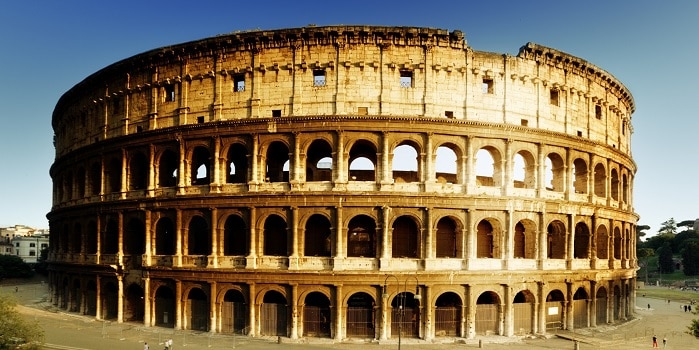 Rome was a center of learning, trade and commerce for ages and has contributed significantly in the development of these areas. The origination of the word “Coliseum”, probably come from colossal statue of Nero which once stood near the stadium.

The discussion of Rome would be unfinished without the description of so the much talked Roman Colosseum. But non doubt the architecture and the concept is definitely a matter of appreciation and pride.

Originally was the Flavian Amphitheatre, an elliptical amphitheatre located in the heart of the city of Rome. It is one of the greatest works of Roman architecture and Roman engineering. The building was constructed by emperors of the Flavian dynasty, hence its original name. In antiquity, Romans may have referred to the Colosseum by the unofficial name Amphitheatrum Caesareum; this name could have been strictly poetic.

The Colosseum or Coliseum occupies a site just east of the Roman Forum, its construction started between 70 and 72 AD under the emperor Vespasian, opened by Emperor Titus in 80 AD with 100 days of games which roughly have taken the lives of some nine thousand animals and remodeled by Domitian who constructed the hypogeum, a series of underground tunnels used to house animals and slaves. Also he added a gallery to the top Colosseum to increase its seating capacity.

The Coliseum was used for gladiatorial contests and public spectacles, with a capacity of 50 000 spectators. It was used for the next 500 years with the last recorded games being held there. As well as the traditional gladiatorial games, many other public spectacles were held there, such as mock sea battles, animal hunts, executions, re-enactments of famous battles, and dramas based on Classical mythology.

It ceased to be used for entertainment in the early medieval era and it was later re-opened for such varied purposes as housing, workshops; quarters for a religious order, a fortress, a quarry and a Christian shrine.

Today the Colosseum is in a ruined condition, due to damage caused by an earthquakes and stone-robbers. For a long time it has been seen as an icon symbol of Imperial Rome. It’s one of modern Rome’s most popular tourist attractions and still has close connections with the Roman Catholic Church, as each Good Friday the Pope leads torchlight “Way of the Cross” procession to the amphitheatre. The Coliseum is depicted on the Italian version of the five-cent euro coin.

The construction began under the rule of Vespasian Emperor around 70-72. The site was a flat area on the floor of a low valley between the Caelian, Esquiline and Palatine hills, through which a canalized stream ran. Later the area was densely inhabited by the 2nd century.

The Great Fire of Rome in AD 64 devastated it, in addition Nero seized much of the area to add to his personal domain. He built the grandiose Domus Aurea on the site, in front of which he created an artificial lake surrounded by pavilions, gardens and porticoes. To supply water to the area, the existing Aqua Claudia aqueduct was extended and the gigantic bronze Colossus of Nero was set up nearby at the entrance to the Domus Aurea. 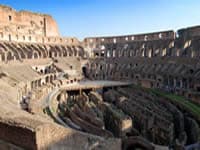 Although the Colossus was preserved much of the Domus Aurea was torn down. The lake was filled in and the land reused as the location for the new Flavian Amphitheatre. Within the former grounds, gladiatorial schools and other support buildings were constructed nearby the Domus Area.

The Coliseum can be thus interpreted as a great triumphal monument, in accord to a reconstructed inscription found on the site, “the emperor Vespasian ordered this new amphitheatre to be erected from his general’s share of the booty”. This is thought to refer to the vast quantity of treasure seized by the Romans following their victory in the Great Jewish Revolt.

The Colosseum was badly damaged by a major fire around 217, possibly caused by the lightning which destroyed the wooden upper levels of the amphitheatre’s interior. It was not fully repaired until about 240 and underwent further repairs in 250 or 252 and again in 320. In 443 a possibly to repair damage caused by a major earthquake. The arena continued to be used for contests well into the 6th century with gladiatorial fights last mentioned around 435. Animal hunts continued until at least 523.

During the medieval period, the Coliseum underwent several radical changes. The arena was converted into a cemetery. Around 1200 the Frangipani family used it as a castle, but the great earthquake of 1349 caused the outer south side to collapse. Much of the tumbled stone was reused to build palaces, churches, hospitals and other buildings elsewhere in Rome.

In 1749, the Pope Benedict XIV consecrated the building to the Passion of Christ and installed Stations of the Cross, declaring it sanctified by the blood of the Christian martyrs who perished there.

Due to the ruined state, the Coliseum cannot use to host large events so much of these larger concerts have been held just outside, using the building as a backdrop. The Colosseum was covered with an enormous awning known as the velarium. This protected the spectators from the sun. It was attached to large poles on top of the Colosseum and anchored to the ground by large ropes. A team of some 1,000 men was used to install the awning.