Irkutsk is one of the largest and most important cities in the Russian region of Siberia. Irkutsk is also the administrative center of the Irkutsk Oblast province, because of its nice buildings and its rich culture; Irkutsk is also known as the Paris of Siberia.

It is located in the eastern Russia, in the junction of the Angara River and the Irkut River, in the Asian part of the country’s territory to 5185 Kilometers (3222 miles) from Moscow, the capital of Russia and to 60 Kilometers (37.2 miles) from the famous Lake Baikal, the deepest lake of the World. 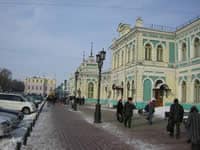 The population of Irkutsk is around 750 000 inhabitants. Because of its location in Siberia, Irkutsk has a sub artic climate with a radical variation of temperatures amongst seasons. Nevertheless, thanks to the Lake Baikal, the temperatures are not so extreme like the rest of the Siberian region.

During summer, temperatures in Irkutsk are around 18ºc (64.4 ºF), however temperature can climb quite in the summer’s peak around July, being the maximum temperature registered 37ºC (99ºF); July is also the month with the greatest precipitations in the region. In winter, temperatures decrease considerably, mainly in January when they can reach -19ºC (-2.2ºF).

The city was founded in 1652 by Yakov Pokhabov. At the beginning, the city was used as base to gold-trading and to the collect tax from the Buryats. It was one of the first Russian settlements in Siberia. In 1686 the same year that Irkutsk received the status of city, it was built the first road from Moscow to Irkutsk. Because of this road Irkutsk became rapidly the main point in the route between China and Mongolia.

The city was used during several centuries by the Russian Crown, to send into exile political prisoners; mainly in the XIX century after the Decembrist revolt against the Czar Nicholas I. Amongst the people exiled, there had a great number of officers, artists and nobles; therefore, the city became an important intellectual center.

During the XIX century the city experience a great development because of the massive migration of exiled and the discovery of gold in the region most blocks of traditional wooden buildings with beautiful carvings, were constructed in that time, like the Trans Siberian Railroad that was finished in 1898.

Irkutsk conserves still the Russian architectural style from the XIX century, which was completely destroyed in other cities such as Moscow or Saint Petersburg in the XX century, when the country was industrialized.

During the communist revolution, the city was scenery of several confrontations amongst Bolshevik and anti- Bolshevik. The execution of Kolchak (on of the main anti-Bolshevik leaders) took place in this city in 1920. The communist age in Russia was a stage of industrial development in the Siberian Region.

Irkutsk hosts some of the most important educational institutions of Russia like the East-Siberian branch of the Russian Academy of Science or the Irkutsk State Universtity; there also around 36 institutes and 9 vocational schools in the city.

There are also many astronomical, geographical and biological stations; therefore, Irkutsk’s population is composed mainly by young people, most of them are students, who come from several parts of Russia and the world to study in Irkutsk. Besides, the city has many historical monuments that worth visiting such as the Acension Church, the Epiphany Cathedral, the Saviour Church, the Church of Our lady of Kazan, the City History Museum, the Geology Museum, the Sukachev Art Museum, etc.

The city is surrounded by many beautiful landscapes such as the Lake Baikal, the Olkhon Island, the Cheriy Peak or the Arshan Village. It can reach Irkutsk using the Trans Siberian Railway or traveling by plane to the Irkutsk Airport that receives flights from several cities of Russia, China and South Korea.

There are several industries in Irkutsk like energy plants, food industry, airplane building, ship and aviation repair industry and building materials industry. In addition to, the city offers many cultural spectacles such musical life (there are 5 professional theatres), art expositions and many sporting events. Irkutsk is without doubt one of the most attractive cities of the current Russia.