Kingscote is the most important and largest town of Kangaroo Island, which is one of the biggest islands of the South Australia Territory. Kingscote is located at the north coast of the Island, near Nepean Bay.

Nevertheless, some years later the Capital and the company were moved to Adelaide, which is the current capital of South Australia. 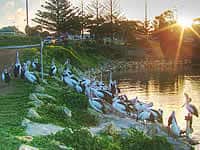 The annual rainfall rate is 421 mm (about 16 inches), being the period from May to October the time with more precipitations. There are around 127 rainfall days per year.

The city has a great number of hotels, nice cafes and good restaurants. Besides, this little town is near Tidal Pool and Emu Bay, which are two excellent places to swim and two of the most famous landmarks of the town. Besides, near Tidal Pool (a rock surrounded swimming pool on the foreshore) there are some little penguins that live in the sandstones and clay cliffs in front of the city.

The town has also a museum in Hope Cottage, which works inside a beautiful cottage that dates from 1850, in this place; it can discover the history of the region.

The town owes its name to Henry Kingscote, who was one of its founders. Since its foundation this town was an important port that received many ships, nevertheless, step by step the port was losing its importance. Currently this port receives mainly ferries and freight services that bring tourists to Kangaroo Island.

Kingscote has several retail shops, where it can find clothing, groceries and souvenirs. Besides, In the town, it can find also 2 banks with ATM facilities, 2 hardware stores, 2 petrol stations and 2 arts galleries. In addition to these facilities, Kingscote has a complete General Hospital and Health Centre which is located at north of Kingscote Jetty and there is also a nice Yatch Club.

Kingscote owns also an Airport, located 13 Kilometers out of the town. It is the most important of Kangaroo Island and is managed by the Kangaroo Island Council. This airport receives several local flights as well as many charter flights.

The Kingscote Airport was opened in 1983 and currently there are two regular passenger transport companies that operate on this airport (Air South Charter and Regional Express); both companies flight to Kingscote from Adelaide. Kingscote is a nice small town, which is perfect to take as base of an exploration trip through Kangaroo Island.