This National Park is located in the northern fringe of the Australian Northern Territory. It is one of the largest parks of the world and the largest of Australia; since, it covers an area of around 1 980 400 hectares (4 894 000 acres).

This territory is almost so large as Switzerland or Israel. The landscapes of Kakadu are diverse and set the scene to experience an adventure travel, the native culture and activities in the nature.

Kakadu is an ecologically and biologically diverse wonderland, with different and beautiful unique habitats. The six main landforms that compose the Kakadu national Park are the Arnhem Land Plateau and escarpment complex (also known as stone country), the outliers, the southern hills and basins, the lowlands, the floodplains and the tidal flats.

The park is composed by a great variety of landscapes and habitats, which vary from the high stone plateau to forest woodland and from the monsoon rainforest to opened savanna plains dotted with mangroves-fringed estuaries.

The Park is inhabited by over 77 species of mammals (kangaroos, dingoes, possums, bats, dusky rats, etc), a great variety of reptiles that include 132 different species (like the famous and dangerous Australian Saltwater crocodile or the water pythons), 280 bird species (pelicans, ducks, egrets, herons, spoonbills, sea eagles, etc.), 314 fish species and abundant vegetal life which is composed by around 1600 plant species. Unfortunately several of these species are threatened or endangered.

The name of the Park comes from the “Gagudju”, a native language. This park has the highest concentration of areas with aboriginal rock art of the world, being the best examples of this fact at Ubirr, Nourlangie Rock Nanguluwur. The paintings done in this rocks represent several activities such as hunting, religious ceremonies, sorcery, magic, stories about diverse themes, etc.

Besides, because of the particular climate of the zone with seasons of varied extremes; the native inhabitants of Kakadu divided the year. into six different seasons: Gunumeleng (October, November, December; humid and hot), Gudjewg (January, February; thunderstorms and heavy rain), Banggereng (March; storms), Yegge (April, May; mist), Wurrgeng(June, July, the coldest and dry time) and Gurrung (August, September; windless and hot).

Some of the most popular zones of Kakadu are the beautiful waterfalls such as Gunlom, Maguk, Jim Jim Falls and Twin Falls. Besides, some of the best places to see wildlife in the park are Cooinda, Mamukala Wetlands, Anbangbang or Yellow Water Billabong. Fishing is also an important activity amongst Kakadu’s visitors, mainly in Yellow Water and at south and east Alligator River.

The Kakadu Park is connected to the city of Darwin through the Arnhem Highway and is linked to Pine Creek and Katherine by the Kakadu Highway. Besides, the town of Jabiru offers several accommodations options to the Kakadu’s visitors.

Aboriginal people have lived in this region since 40000 years ago; therefore, the Kakadu Park owns a great number of archeological sites (around 5000) that include zones with rock carvings and cave paintings. The cultural richness that saves Kakadu is one of the reasons why the Park is part of the World Heritage List of UNESCO.

The Park is listed in three different stages, because of its cultural significance and the importance of its natural richness; being one of the only 22 World Heritage sites listed for both its natural and cultural heritage. Besides, the aboriginal people of Kakadu had contacts with the Macassans from Sulawesi in the Indonesian archipelago; there are some evidences of this ancient contact between the Macassan culture and the native people from Kakadu. Nevertheless, there are not evidences of permanent Macasan settlements in Kakadu. 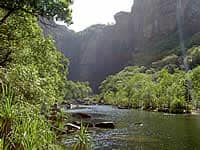 The first non aboriginal explorers that arrived to the Kakdu’s region were the Dutch Jan Carstenz in 1623 and Abel Tasman, who visit this part of the Australian coast in 1644.

The region was abandoned by the European people, until 1802, when Mathew Flinders surveyed the Golf of Carpentaria; almost 20 years later, Philip Parker King explored also the Gulf of Carpentaria and the three Alligator Rivers, which are the axis of the current park.

But the first European settlement in the Kakadu region was established around 1845 by Ludwig Leichhardt as part of his commercial route between Moreton Bay in Queensland and the Port Essington in the Northern Territory. Along the XIX century, British established several settlements in the region, such as Fort Wellington, Port Essington, amongst others; in order to protect the northern Australia against French and Dutch invasions.

Nevertheless, most new British settlements were abandoned, because of the isolation of the region that caused often lack of water and food as well as sickness. However, like most part of Australia the European arrival signified the devastation of most aboriginal population of Kakadu region.

During the XIX century the pastoral industry was the most important activity of the region; Europeans introduced in Kakadu the Domestic Asian Water Buffalo, which resulted in damage for the fragile wetlands and floodplains; nevertheless, the livestock was progressively abandoned at the end of the century, because zones such as Barkly Tablelands or Victoria River offered better conditions to this activity.

At the end of the XIX century and the first years of the XX century, many Christian missionaries arrived to Kakadu, they established several missions that played an important role in the development of the region; since, these missionaries contacted with the aboriginal people and taught them the western culture. These missions worked during the first half of the XX century, the Oenpelli Mission was the last mission to be founded and worked for 50 years.

The first proposal to create a national park in the zone that currently is occupied by the Kakadu Park, was made in 1965, when Australian people was becoming interested about the conservation of its natural heritage and the rights of the aboriginal people. Nevertheless, the procedures to create the Park and acquire the titles over several tracts of land that now are part of Kakadu, were initiated by the Australian government only in 1978. T

he Kakadu National Park was officially created in 1979 and was declared part of the National Park and Wildlife Conservation Act 1975. Nevertheless, between 1979 and 1991, several changes were made in the territorial configuration of the Park and its management policy. Currently the Kakadu national Park is managed by the Aboriginal traditional owners and the Director of National parks.

Kakadu is an important tourist attraction in the country that receives around 250 000 tourists per year and is one of the most famous wonders of Australia.