Sydney is the most important and populous city of Australia with over 4 million inhabitants and covers almost 1120 square kilometers (700 square miles). It is also the capital of the Australian State of New South Wales.

It is also the oldest city of Australia; since, Sydney was the first British colony in the country. It is located at southeast of the country on Port Jackson. 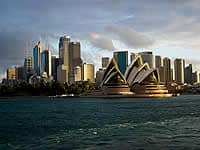 Sydney has a very pleasant climate, with warm summers and cool winters. There are moderate rainfalls throughout the year.

Sydney is considered one of the most beautiful and liveable cities of the world. It is a remarkably easy city to move around in; since, there is an excellent train service, as well as many bus and ferry lines that cover all points of the metropolitan area. Nevertheless, the monorail or walking is the best way to know this wonderful city. Sydney is also the heart of the Australian economy and one of the most important finance centers of the Asia- Pacific region.

According to radiocarbon tests, the region occupied now by the city was inhabited since 30000 years ago by indigenous Australians. According to the chronicles, when first British arrived to Sydney in 1788, around 6000 native people lived in the region, this people was divided into three language groups or clans, which were known as Darug, Dharawal and Guringai.

Captain James Cook arrived to this region in 1770, establishing the first contact with the aborigine people. 18 years later, by order of the British government, Arthur Philip founded a convict settlement in the territory that currently occupies Sydney in the place known as Sydney Cove on Port Jackson, on January 26, 1788.

Philip named the new colonial settlement with the name of the British Home Secretary, Thomas Townshend, Lord Sydney, who helped Philip to get the authorisation to establish the colony. Unfortunately, during the first years of the colonial period, most part of the aborigine Sydney’s population was killed by British colonisers.

The city was rapidly developed and by 1830, Sydney had several banks, markets, good thoroughfares and the first suburbs. In 1842 the municipal council was created and Sydney was declared the first city of Australia. During the second half of the XIX century, the city received several waves of immigrants from the entire world; who were attracted by the gold rushes.

During the XX century the city had a rapid suburban development, because of the industrialization. In the early XX century Sydney reached a population that exceeded the million of inhabitants, becoming the largest city of Australia. In second half of the XX century, Sydney became also the main economical center of the country, surpassing Melbourne (the second city of Australia).

Most attractions of the city are located within the central business district (CBD) and around the harbour. The harbour is a port and a lively recreational area, which offers activities such as sailing, swimming, walks, and picnics along its foreshore.

Probably, the two most representative landmarks of Sydney are the Sydney Opera House (opened in 1973 and considered the architectural symbol of the XX century) and the Sydney Harbour Bridge (opened in 1932). Another important attraction of Sydney is Bondi Beach, the most famous beach of the city, because of its wide crescent of sand and great surfing breaks; this place is full of nice restaurants and cafes, making it a fascinating place to visit.

Sydney has also an impressive wildlife. In this city, it can find the best samples of the unique animal and vegetable species that inhabit Australia. Places such as, the Taronga Zoo, the Sydney Aquarium, the Royal Botanic Gardens and Centennial Parklands are ideal place to know part of the amazing Australian wildlife.

Sydney is a real paradise to sports lovers; since, the city offers a diverse range of sporting events both for spectators and players; that’s why, Sydney was seat of the Olympics Games in 2000.

Sydney is also one of the main art and culture centers of the world. The city offers varied arts and music performances as well as an excellent theatre scene; being the Opera House the heart of the Sydney’s cultural life. In brief, Sydney is the gateway to Australia, a dynamic and cosmopolitan city that combines perfectly education, culture and business with great leisure. It is a city that really worth knowing.