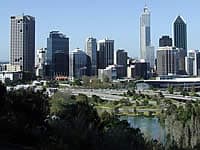 Western Australia has borders with the Northern Territory, South Australia and the Indian Ocean at west and north. The vast territory of Western Australia includes three deserts: the Great Sandy, the Gibson Desert and the famous Great Victoria Desert.

Because of the size of the territory; there are several climates in Western Australia, for example the southwestern coast of the state; where are cities such as Perth or Hyden, has a climate relatively temperate; therefore this zone owns several forest areas, where it can find the big karri (eucalyptus diversicolor), which is considered one of the tallest trees of the world (90 meters height). This part of the state is considered also an agricultural zone and its rainfall rate fluctuates from around 300 mm (12 inches) to 1400 mm (55 inches) during the year; besides, it has also a great biodiversity both in land and in the Ocean.

On the other hand, the central zone of the State is a region semi arid, whose annual rainfall rate is between 200 mm (8 inches) to 250 mm (10 inches); however, most precipitations in this zone occurs in summer when some sporadic falls related to cyclones arrive to the region. In the northern region of Western Australia the climate is tropical, hot and monsoonal. The rainfalls rates range between 500 and 1500 mm (20-60 inches); nevertheless, from April to November, the climate is quite dry.

Western Australia has been inhabited for humans since 40 000 years ago; nevertheless, like all Australia, the Western territory was visited by Europeans only since the XVII century, when Dutch started to explore the region in 1616. English sailors arrived to Western Australia between 1688 and 1699.

One of the first European settlements in this region was established in 1826 in the place known as King George Sound, (currently known as Albany). This settlement was founded to prevent French’s establishment in Western Australia. In 1829 the Captain James Stirling founded the Swan River Colony which was divided into two towns, which originated the port city of Fremantle and the city of Perth (the current capital).

The gold’s discovery in Western Australia (in Kalgoorlie) at the end of the XIX century caused a fast growth of the population in the region. By 1897, Western Australia was a self-government colony. During the XX century the development of the region continued with the construction of several important infrastructure works, like the construction of the pipeline between Perth and Kalgoorlie, which transport water through 530 kilometers and is considered one of the most important supports of the population growth and economic development of the state in the early XX century; when the first waves of migrants arrived to the region. Besides, after the World War II, Western Australia received also a great number of migrants from Italy, Yugoslavs and Greece.

Western Australia is also the major producer of bauxite, which is also processed into aluminia in the three refineries of the state, which produces more than 20% of total world production. Besides, this state is the third largest iron-ore producer and produces around 75% of the gold that is extracted in Australia.

Besides, in the last years, tourism became an important source of incomes for the state. Because of its attractions, such as Wave Rock, the Kimberley region(a real natural paradise at north of the state, where is the Purnululu National Park), the Australia’s Coral Coast, the Australia’s Golden Outback and the beautiful cities of the state, Western Australia receives many visitors, who come mainly from Europe, Singapore, Japan and Malaysia.

Amongst the main cities of Western Australia, it highlights Perth, the capital of the state has a population of 1554769 inhabitants, and is considered one of the most isolated metropolitan areas of the world; since, the nearest city to Perth is Adelaide, which is 2104 kilometers away. Perth has a great and prosperous industry, which is based mainly in mining.

Besides, Perth is the economical and cultural center of Western Australia, because here, it can find many universities, banks, museums, art galleries, concert halls and much more. Therefore, Perth is the favorite destination for the visitors that want to explore Western Australia. This city is served by two airports that receive national and international flights.

Another important destination of Western Australia is Hyden, a small town located 339 kilometers east Perth, near the Wave Rock and Mulka’s Cave, which are tow of the most famous tourist attractions of the state and the country. Western Australia is connected with all the country by several highways. There is also a rail service that connects Perth with Adelaide and Sidney via Kalgoorlie. There are also several buses and ferries available. Western Australia is a nice territory full of natural wonders and a great vacation destination.