Also known as “Bungle Bungle”, the Purnululu National Park is an amazing conservation area that covers around 239 723 hectares. It is located in the north east of the Western Australia state, in the region known as Kimberley; being Kununurra, the nearest major town.

The name Purnululu means “sandstone” and the park contains the deeply dissected Bungle Bungle hill range composed of Devonian-age quartz sandstone eroded over a period of 20 millions years into a series of beehive-shaped towers or cones.

The steeply sloping surfaces of these cones are distinctly marked by regular horizontal bands of dark-grey cyanobacterial crust (single-celled photosynthetic organisms). These cone towers have become the most emblematic icons of the park.

The Bungle Bungle range of the Purnululu National Park is without doubt one of the most fascinating geological landmarks of Australia. The domes of orange and black sandstone of the Park, rise 300 meters above the grass-covered plain. The Purnululu National Park contains the finest examples of cone karst in sandstone in the world, which owe their existence to a unique combination of geological, erosional, biological and climatic phenomena.

The Bungle Bungle Ranges of the Purnululu National Park also display to an extraordinaire degree evidence of geomorphic processes of dissolution, erosion and weathering in the evolution of landforms.

The dramatically sculptured structures are unrivalled in their scale, beauty, extent and variety of shapes anywhere in the world; besides, the intricate maze of towers is accentuated by sinuous, narrow, sheer-sided gorges lined with majestic Livistona fan palms.

These and the soaring cliffs up to 250 m high are cut by seasonal rainfalls and pools, producing the major tourist attractions in the park, with evocative names, such as Echidna Chasm, and Frog Hole, Piccaninny and Cathedral Gorges. In addition to the fabulous mounds, the park has also many lagoons, rock pools, waterfalls and a fascinating wildlife.

Because of its great beauty, the Purnululu National Park is considered by many people one of the natural wonders of Australia and the world; being considered a place as important as the Ulurur-Kata National park and some visitors of the region, describe this amazing place as the Australian equivalent of the famous Grand Canyon in the United States.

The Purnululu national Park is also a popular destination amongst hikers and four-wheel-drive enthusiasts, who find in the park the ideal scenery to practice their adventure sports, nevertheless, because of the fragile nature of the rock towers; climbing in the park is forbidden . Another great way to know the park is by plane or helicopter, there are available flights over the Bungle Bungle from Kununurra during all the year.

There are also several camping facilities in the park at Walardi or Kurrajong Camp. Because of the weather, the Purnululu National Park is opened to the tourists between April and November and it accessible only using four-wheel drive vehicles; which depart from Kununurra and travel around 200 Kilometers to south until the Park, through the Spring Creek Track. This trip lasts about 3 hours.

Scientists estimate that the sandstones formations of Bungle Bungle in the Purnululu National Park are around 350 millions years old and were formed along the Devonian period. Unlike most rock shapes of this kind that were part of reefs; the rocks of this park were part of the sediments of an old river bed.

The Purnululu National Park has been inhabited by aborigine people by several thousands of years; therefore, there are many ancient vestiges of Indigenous art and burial sites. One of the first human groups that inhabited this region was the Kija tribe, who named the region as Purnululu. 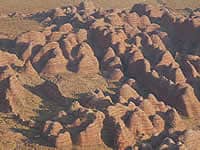 Although the Bungle Bungle Range was extensively used by Aboriginal people during the wet season, when plant and animal life was abundant, few Europeans knew of its existence until the mid-1980s.

The name “Bungle Bungle” was given for first time to a nearby station in 1930; but, later in 1983, when the Department of Lands and Surveys had to call the hills, they decided to name it as the station.

The beauty and importance of the Purnululu National park was unveiled recently, thanks to a film team that showed to the world the incredible landscapes of this natural paradise in 1983.

The area that currently occupies the Park was established as National Park by the Australian authorities in 1987 to protect the amazing geological formations inside it, as well as the vegetal life, which has a great botanical importance. 16 years later, in 2003, UNESCO recognized also the importance of the outstanding geological value and the natural beauty of the Purnululu National park and declared it, a World Heritage Area.

The Park is currently managed by the Western Australia’s Department of Conservation and Land Management (CALM) and the Purnululu Aboriginal Corporation, which is composed by representative leaders of the Aboriginal people, who are divided for languages clan groups and are descendants of the Djaru and Kija tribes, who were the first inhabitants of the region.

The Purnululu National Park is now one of the favorite destinations amongst Australian people and was one of the 15 World Heritage places included in the National Heritage list on 21 May 2007; in recognition of its ecological and cultural importance. It is without doubt one of the wonders of Australia.