The Pinnacles Desert is one of the most beautiful and impressive landscapes of Australia. It is located in the heart of the Nambung National Park, in the Federal territory of Western Australia, 250 Kilometers north from Perth.

The main attractions of this amazing place are the thousands of huge limestone pillars that rise from the desert’s yellow sands, creating an awesome view that looks as a landscape of science fiction movies. These pillars vary in shapes, textures, sizes and colours. The raw material that composes the limestone of these rock formations, came from seashells from an earlier epoch rich in marine life.

Some of the pinnacles of the park reach up to 3.5 meters (11.48 feet) tall. Their shapes are jagged and sharp; whereas others resemble tombstones. The best season to visit the Pinnacles Desert is in spring, between August and October, when the climate is mild and the wildflowers become in bloom. Besides, because of the marvelous play of light and the awesome colors, the best view of the pinnacles can be gotten in the early morning or late afternoon.

To reach the Nambung National Park and the Pinnacles Desert, you just need to make a short and comfortable trip from Perth (the capital of Western Australia); therefore it is a popular destination in Western Australia. The name of the park, “Nambung”, comes from an aboriginal word that means crooked or winding river, probably in reference to the river that cross the park and give its name to it.

This zone has also a very attractive wildlife, which is composed mainly by nocturnal animals; however, like most parts of Australia, the region has also an important population of kangaroos, possums, brush, wallabies, snakes, lizards and emus, which can be seen mainly in the evening or early morning.

Besides, near the Pinnacles zone is Hangover Bay, which is definitely one of the most fascinating beaches of the country; it is a white-sand beach from which dolphins can be spotted. The nearest town to the Pinnacles is Cervantes, which is 245 Kilometers (3 hours by car) north of Perth via the Brand Highway. Currently, there is only one access road into the Pinnacles Desert, which is 27 kilometers long. The park opens from 9am to 5pm.

The impressive landscapes and peculiar stone formations of the Pinnacles Desert were originated several millions years ago. The material of these stone mounds came from sea shells that were broken-down into lime-rich sand. Later, this sand was blown inland by natural elements, like the wind, creating sand dunes. Step by step, rainfalls caused the lime to seep to the bottom of the dunes, generating the formation of limestone. 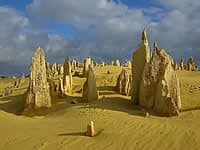 Besides, many plants grew on top the dunes; this fact helped to protect the dunes from the wind, therefore, these dunes were not blown again. This process allowed also the creation of an acidic layer of soil over the top of the dune; then, a layer of calcrete (a sedimentary rock or hardened deposit of calcium carbonate) formed over the soft limestone under the dunes.

In addition to the phenomena before described; small cracks produced in the hard layer allowed to plants to extend down their roots, allowing water to flow. This phenomenon was gradually eroding the limestone beneath; this was replaced by quartz sand from the dune above, producing a limestone rock, known as Tamala Limestone.

This erosion process continued longtime, leaving only pillars of limestone that were exposed when the vegetation on top of the dunes died, because of climatic changes or bush fires; then, the wind blew again the sand that existed between the pinnacles, revealing the beautiful landscape that saw the first aboriginal inhabitants of the region and we can see still now.

The oldest remains of aboriginal artifacts found in this place date from 6000 years ago; nevertheless, there are not evidences of recent aboriginal occupation. Therefore, some people believe that the pinnacles were exposed about 6000 years ago and later covered again by the sands, before they were exposed again in the last centuries.

This zone of Western Australia was explored for first time by European people around 1658, when appeared in the Dutch maps of North and South Hummocks. This area was mentioned again by the navigator Philip Parker King, who talked about Pinnacles desert in his journal in 1820.

Nevertheless, the Pinnacles Desert remained almost unknown by the Australian people until the second half of the XX century; since, in 1960s, the Department of lands and Surveys decided to add the area of Pinnacles Desert to the existing Nambung National Park, which was created in 1956.

Since then, the Pinnacles Desert became one of the most important tourist attractions of the country. Currently, this Australian wonder receives around 250 000 visitors per year and it estimates that around 310000 tourists will arrive to this zone, once the Indian Ocean Drive is completed in 2011; since, this highway will pass within 5 Kilometers from the Pinnacles Desert. Desert lovers and photographers alike flock to this amazing area to admire these enigmatic rock formations that are part of the wonderful natural heritage of Australia.