This wonder of the ancient World was located in the island of Pharos just off the coast of the city of Alexandria in Egypt. The great Lighthouse served to guide the sailors that traveled to the city founded by Alexander the Great.

The Lighthouse of Alexandria worked by 15 centuries and it was the last of the six lost wonders of the ancient world that disappeared. It was one of the greatest architectural feats of the antiquity.

Besides, the Lighthouse was the only wonder that was constructed with practical purposes; since it helped seafaring ships to find the harbor safely. The lighthouse served also as a military lookout for approaching enemy ships and a tourist balcony, because it had two observation platforms.

The Lighthouse had two beacons near its summit. At night a great bonfire generated the light and during the day a great mirror made with a concave disc of polished metal, reflected and directing the sun rays. The colossal building was constructed with large blocks of light colored stone and it was composed by 3 basic structural elements: a rectangular base, an octagonal midsection and a cylindrical upper section where the beacons were.

Access to the entrance was up a long vaulted ramp, from which a spiral staircase led up to many chambers which were used probably by beasts of burden to carry fuel for the fire of the beacons. According to ancient stories the lighthouse could be seen from up 35 miles (56 Km) away and according other legends, the light of the beacons could burn enemy ships, but this legend is very difficult to believe.

It believes that the Lighthouse was between 330 and 600 feet (100 – 180 m) height and it was the highest building of the world except the Great Pyramid of Giza. Some texts mentioned a statue which was placed at top of the lighthouse and a poet named Poseidipos of Pella who lived in Alexandria in the III century BC, wrote talking about a statue depicted Zeus the Savior which was accompanied by Poseidon the Lord of the Sea

The construction of the Lighthouse probably started in the III century BC by order of the governor Ptolemy I Soter who was one of the generals of Alexander the Great and the first ruler of Greek origin. The construction of the impressive building was finished by the son of the Hellenic general Ptolemy Philadelphos around 285 BC. 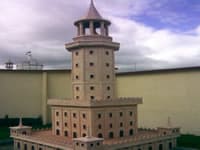 The designer and constructor of the Lighthouse was the architect Sostratus who was forbidden by Ptolemy to put his name on his work as it was traditional. Nevertheless, the architect wrote an inscription on the base’s walls:”Sostratos of Dexiphanes the Cnidian to Saviour Gods for the seafarers”.

The inscription was hidden under plaster layer, covered by another inscription in honour to Ptolemy; but after some centuries the plaster off and the name of the architect was revealed.

In 796 the Lighthouse would have lost its upper storey and 100 years later the sultan Toulun (868-884) built a domed mosque on the summit. By 950 several cracks began to appear in the walls of the tower.

The Lighthouse dominated the Harbor during many centuries, in 1183 the Muslim traveller Ibn Jubayr visited Alexandria and described the Lighthouse thus: “Description of it falls short, the eyes fail to comprehend it, and words are inadequate, so vast is the spectacle”.

Unfortunately two earthquakes in 1303 and 1323 damaged seriously the tower; according to the Arab traveller Ibn Battuta, in this time, it could not enter into the ruins of the Lighthouse.

Recently in 1994 a scuba-diving expedition leaded by the archaeologist Jean Yves Empereur found many blocks belonged to a great building submerged in the seafloor of the harbour of Alexandria. Probably these blocks were part of the legendary Lighthouse.

Nevertheless, many academicians think that these blocks belonged to other buildings because the original blocks of the Lighthouse would have been recycled to build other constructions as usually Egyptians did.