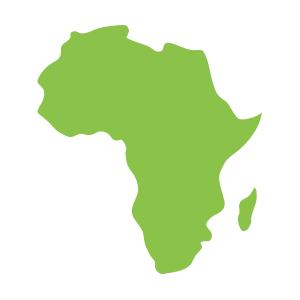 Africa is the continent where the human history began. It is also the second largest continent of the world with 30,272,922 square kilometers.

It is surrounded by the Mediterranean Sea to the north, the Indian Ocean to the southeast, the Atlantic Ocean to the west and the Suez Canal to the northeast. There are human vestiges of agriculture and cattle in Africa that dates from 6000 BC. Some of the most ancient examples of plants domestication were founded in both, Ethiopia and Western Africa.

Generally, the climate of Africa varies from tropical to sub-arctic on its highest peaks; including the desert in the northern half, while it is able to find both savanna plains and dense jungle regions in the central and southern areas. For this reason, Africa has the privilege to refuge the largest combination of density, wild animal populations and diversity including carnivores, herbivores, jungle creatures and aquatic life.

It is estimated there are over a thousand, and even over two thousand languages in Africa, most of them are of African origin, however some are also of European or Asian origin. This influence have become Africa in the most multilingual continent in the world, so that, it is not rare to find most of the individuals speak fluently multiple languages.

Some of the oldest civilizations of Africa were Egypt and Phoenicia. Later, the north of Africa was occupied by the Roman Empire and after by the Arabian Islamic Caliphate. In the XIX century most territories of Africa were invaded by the colonial armies from the most powerful European countries like England, France, Spain, Germany, Italy and Belgium.

However, nowadays Africa has 910 844 133 inhabitants, 53 countries, and it is the poorest and most underdeveloped continent; but it is also a continent that hides amazing treasures and cultures. From Egypt to South Africa, you can find an endless number of impressive natural sites and monuments, including beautiful mountains, exuberant wildlife in natural reserves, amazing waterfalls and much more.

Unfortunately for long time, and until now, most African marvels were hidden because of either ravages of time, nature or repressive governments.

Join us to know more about the wonders of this exceptional continent!

Explore the wonders of Africa by country to see what each location has to offer.