The Northern Red Sea is considered one of the most beautiful submarine paradises of the world. It is called sometimes an underwater “Garden of Eden” and is considered by CEDAM one of the seven Underwater Wonders of the World.

The Red Sea is a salt water inlet of the Indian Ocean which is between Asia and Africa. This large natural channel is around 1900 Kilometers length, between 100 to 300 Kilometers breadth and about 500 meters depth. Its water sometimes turned a slightly red, due to the blooming of a particular kind of microorganisms known as “Red Algae” (Cyno-bacteria or Trichodesmium Erytreum).

This also the reason of its name; since, it is a literal translation from the Greek phrase “Erythra Thalassa” that literally means Red Sea.

The Northern Red Sea Region is amongst the coasts of Jordan, Egypt, Israel, Saudi Arabia and Eritrea. The Northern Red Sea is surrounded by desert coasts, which are one of the world’s largest expanses of sand. Nevertheless, despite its desert superficial appearance, the Northern Red Sea hosts one of the most diverse and beautiful underwater ecosystems of the planet, since, this wonderful sea is the home of many beautiful corals formations and a wide range of exclusive fish varieties.

The water of this sea is considered amongst the most saline of the world, with salinity rates that fluctuate between 3.6 and 3.8%. On the other hand, the tidal rate in the Northern Red Sea is 60 cm (1.6 feet). Besides, the system of underwater currents creates a delicate balance that generates a unique climate.

It calculates that there are around 2000 Kilometers (1240 miles) of corals in this underwater Eden, which is composed by several marine habitats such as salt pans, mangroves, salt marshes and sea grass. One of the most famous fish of the Northern Red Sea is the Bright Red Lionfish, whose dorsal spines are very poisonous, this fish live usually near the sea bottom, waiting to trap smaller fish in nooks and crannies.

Other nice specimen that inhabits these waters is the triggerfish, which escapes when it is under threat, launching a jet of water; the anemones, the clown fish, dolphins, sharks, rays and eels are also very abundant in the Northern Red Sea. An important part of the Northern Red Sea ecosystem is protected by the Egyptian government in the Ras Mohamed National Park, which is on of the favorite places of the lovers of the scuba diving.

One of the most famous parts of the Northern Red Sea is the Gulf of Aqaba also known in Israel as the Gulf of Eilat. It is located at east of the Sinai Peninsula and at west of the Arabian mainland. Jordan Israel and Egypt have coastlines in this Gulf. Probably the most important port in this Gulf is Aqaba, one of the most important cities of Jordan, which has the same name of the famous Gulf.

However, Eliat city in Israel and Taba in Egypt are also two important cities in the Aqaba Gulf. The three cities are used as base by most visitors that want to travel by the Northern Red Sea. Therefore, these cities offer a great variety of tourist services.

The Aqaba Gulf is one of the favorite places in the world for diving. This region is full of wonderful corals and great fish diversity. There also many shipwrecks, which provide an ideal habitat for marine organisms. Some Archeologists believe that the Gulf of Aqaba was the place where the sea was crossed by Moses during the famous biblical story of the Passage of the Red Sea of the Exodus Book; nevertheless, this theory was not yet proven.

The impressive diversity of life of the Northern Red Sea, has its origin 30 million years ago, when the Red Sea was closed at its southern end and open on its northern end, because of this fact it opened up into the Mediterranean Sea, therefore many Atlantic species arrived to the Red Sea and they prospered. Therefore, Red Sea hosts species from both Atlantic and Pacific Ocean. 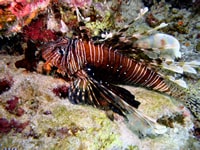 Most archeologists believe that Egyptians were the first to attempt a mission of exploration in the Red Sea; they explored the Red Sea in order to establish commercial routes to the east. This water mass has played an important role in the history of the region.

According to the bible, it was the sea that Moses crossed when he fleeing from Egypt with his people. In the VI century BC the king Darius of Persia ordered an exploration mission in the Northern Red Sea. Alexander the Great also sent several expeditions to explore the Red Sea and the Indian Ocean.

Many texts about navigation routes in the Red Sea were written by Egyptians, Greeks and other civilizations of the region in the Classic Age. The Periplus of the Erythrean Sea is probably the most famous text about this theme; it was written in the first century AD and relates a detailed description about the routes and ports in the Red Sea and talks about the first route to the India through the Red Sea.

The European interest by the Northern Red Sea revived in the XV century after the Renaissance. In 1798 during the French invasion in Egypt, one of the engineers of Napoleon, J.B Lepere devised the construction of a canal to connect the Mediterranean Sea with the Northern Red Sea. This idea derived some decades later in the construction of the famous Suez Canal. Which was inaugurated in November 1869 and it is still today an important point of the trade between Asia and Europe.

During most part of the XIX century and the first half of the XX century, the Northern Red Sea was controlled mainly by French, British and Italians. After the World War II, USA and the Soviet Union had a great influence in the Northern Sea region.

Nevertheless, in 1967 the Suez Canal was closed for eight years, because of the Six Days War. This fact marked the end of the Northern Sea Red as the main route of trade between Asia and Europe. Today most ships use the route of the Cape to travel between both continents.

In 1983 thanks to the efforts of several environmentalists like the scientist Eugine Clark, the Egyptian government decided to create the Ras Mohamed National Park to protect the ecosystem of the Northern Red Sea. Now, the Northern Red Sea is one of the most famous diving destinations of the world.

There are many recreational diving sites along the entire coastline that surrounded this aquatic paradise; such as Aqaba in Jordan, Sharm-El-Sheikh, Dahab and Taba in Egypt or Eilat in Israel. The Northern Red Sea is definitely one of the most beautiful and impressive underwater ecosystems of the world.