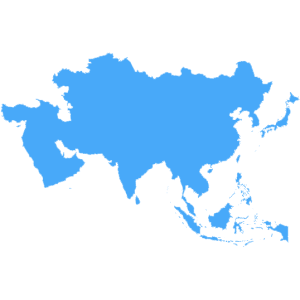 Asia is usually defined as part of the landmass of Eurasia becoming the largest and most populous continent of the world with around 4 000 millions people. It is surrounded by the Pacific Ocean in the east, the Arctic Ocean in the north and the Indian Ocean in the south.

Asia has been cradle of several of the greatest civilizations in the world’s history, like Mesopotamia, Persia, India and China, as well as main religions such as Christianity, Judaism, Islam and Buddhism.

Besides, the humanity owes to Asian civilizations many of the most important technological advances of the History.

Currently, Asia has the third nominal GDP of the continents, and its economy has grown since the World War II to the XXI century; this growth has been concentrated mostly in four regions: South Korea, Taiwan, Hong Kong and Singapore, which are known as the Asian Tigers or Pacific Rim. Besides, China and Japan are two of the most important economies in the World

This giant continent is very rich in natural resources such as petroleum, fish, water and metals.

This wonder itself owns also some of the most impressive natural landscapes of the planet like Himalaya Mountains, the Gobi Desert and many impressive structures created by men in both antiquity and modern times.

Asia is full of wonders, let's get together to discover them all!