Located at the east bank of Li River, the park is 1.5 kilometers from the downtown area of Guilin.

The park is named after from its seven peaks resemble the pattern of the Big Dipper constellation. It is the largest park, consists of some of the most spectacular sights in the city. Some of the pincipal attractions of the park are the Seven Star Cave, Dragon Hiding Cave, Flowers Bridge, etc.

The Flower Bridge (Hua Qiao) is the main entrance to the Park, an elegant arched structure dating from the Song Dynasty that crosses the confluence of East River and Lingjian Stream that passes through the park.

Putuo Mountain, where Avalokitesvara Bodhisattva is worshipped, is the main body of the park. It abounds with caves and pavilions. At the southwestern foot of the mountain lies the natural air condition Xuanfeng Cave.

At the top of the mountain are Putuo Stone Forest, Xuanwu Pavilion and Zhaixing Pavilion. In addition, there are numerous valuable tablets on the mountain. Light of China Square is between Putuo Mountain and Crescent Mountain. It boasts of two craftworks, one is the stone that was used to carving murals and the other is Shi Ji Bao Ding (the precious Ding of the century).

The mural, made up of more than 100 stone carvings, epitomizes 5000-year Chinese civilization. Shi Ji Bao Ding (has a height of 4.6 meters) symbolises that the country flourishes and people live in peace.

The Cave has been a tourist attraction since the Tang Dynasty. The temperature inside the Cave always remains 20 degrees Celsius all year around.

The Cave is divided into three main parts.

The upper part of the Cave is very high and steep. The middle part is an 814-meter-long tunnel serving to be the touring area. The lower part is an underground water channel where tourists can sit in a small boat and tour around the Cave. In addition, the equipped lighting adds an enchanting touch to the spectacular scene.

As another attraction in the park, Camel Hill is situated a little further away from the Putuo Hill and Cresent Hill. It is called Camel Hill because this limestone outcrop looks really like a camel resting among the trees, hence the name.

This delightful park that encompasses hills and natural waterways is a great attractions, favourite to the local people and tourists alike. And thanks to the pleasant climate here, you can pay a visit to Seven Stars Park at any time of year.

Seven Star Park got its name from the seven peaks that are supposed to resemble the star pattern of the Big Dipper constellation nearby, four peaks in the north are called Putuo Hill and three in the south are called Lunar Hill. The famous Seven Star cave is located at the Putuo Hill. 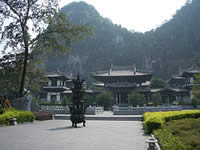 Flower Bridge, built in the Song Dynasty (960-1279), is the oldest bridge in Guilin. Every spring and summer, it is set off with blooming flowers and the streams, hence the name Flower Bridge.

A notable feature of the Crescent Hill is the 200 calligraphy carvings in the caves within it. These are said to be the work of important and talented calligraphers of the Tang (618-907 AD), Ming (1368-1644 AD) and Qing (1644-1911 AD) Dynasties. In the park, there are many Karst views, including the caves and stones. Dated back 1000 years ago, the place was already a place of interest for local people.