Elephant Trunk Hill is located in the city center, on the western bank of Li River Scenery. The Elephant Hill sits in the point where Guilin Peach River joining to the Li River. Elephant Trunk Hill is regarded as the symbol of Guilin. Originally named "Li Hill", "Yi Hill" and "Chenshui Hill". The hill is 3.6 hundred million years old.

The name was chosen because the shape of the hill is just like an elephant drinking from the Li River with its trunk. The clear and green water of Li River at the foot make Elephant Trunk Hill one of the most famous hills in Guilin City.

Of course, all the great limestone formations in Guilin and down the Li River resemble someone or something; you only need to have a good imagination.

Shui Yue Cave (Water Moon Cave) is between the trunk and the legs, which is a semi-round cave penetrated by water. The inverted reflection of the cave in water plus the part above forms a full moon, this phenomenon is unique.

There are over 70 inscriptions carved in the cave from the Tang and Song dynasties were found on the walls in and around this cave, praising the beauty of hills and waters nearby. Visitors can pass through the cave by boat.

Another cave regarded as the eyes of the elephant lies in the hillside. It provides tourists an ideal location to enjoy the panoramic view of Guilin. The pagoda looks like a precious vase on the back of an elephant seen from distance and many beautiful legends about the pagoda with good wishes are said among people.

There is an island out in the Li River called Love Island. It is a beautiful little island covered with bamboo groves and dedicated to lovers. It has many winding paths, and many stone statues dedicated to love and it is a good place to relax and spend some time with special someone.

On calm days, this giant elephant is reflected on the mirror-like surface of the river and in the evening, when viewed under a moonlit sky, the hill creates a lasting and magical impression.

Situated majestically at the southeast of Guilin city and west bank of Li River, Elephant Trunk Hill is regarded as the symbol of Guilin landscape. Originally named "Li Hill", "Yi Hill" and "Chenshui Hill", the hill has a history of 3.6 hundred million years. 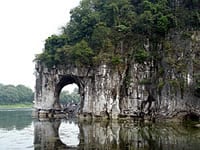 Resembling elephant leisurely sucking water from the river with its long trunk, this hill is famous as Elephant Trunk Hill for hundreds of years.

With an elevation of 200m, the hill towers 55m above the water, measuring 108m in length and 100m in width. Between the trunk and the legs of the elephant is a cave, in the shape of a full moon, penetrating the hill from side to side. People named it "Moon-over-Water Cave".

On the walls in and around this cave, over 70 inscriptions from the Tang and Song dynasties were found, praising the beauty of hills and waters nearby. On top of the hill stands a pagoda named Puxian Pagoda. Built in the Ming dynasty (1368-1644), it looks like the handle of a sword.