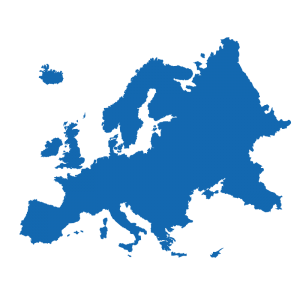 Europe, the Old World and the cradle of Western thought, is part of the geographic continent Eurasia. It is bordered on the north by the Arctic Ocean, on the south by the Mediterranean Sea, on the west by the Atlantic Ocean, and on the southeast by the Black Sea.

Europe is the third most populous continent after Asia and Africa with around 11% of the world’s population and the second smallest in the world by surface area. Europe includes the states of Russia as the largest and the Vatican City as the smallest.

The European land has great variations within relatively small areas; however, in the southern regions the lands are more mountainous, while the north descends from the high Alps through hilly uplands into low plains, which are known as the Great European Plain. There are also some sub-regions, such as the Iberian Peninsula and the Italian Peninsula, containing many plateaus, river valleys and basins.

Europe is the continent where the idea of the Seven Wonders was born, in the classical cultures: Greece and Rome and where the spirit of wonders was conserved during the Middle Ages and the Renaissance.

European nations dominated the world from XVI century to earlier XX century, teaching throughout world the idea of identifying the wonders of each place. Nowadays, European countries are still amongst the most powerful in the world with the highest GDP and the highest levels of education.

From Lisbon to Moscow and from Oslo to Sicily, there are many wonderful landmarks and landscapes in the entire continent. In Europe, the culture and the spirit of the seven wonders is felt every where, in the old cities, in the amazing palaces, inside the ancient churches, and listening to old tales.

Join us and let's contemplate together, some of the wonders of this ancient continent.