Statue of Zeus at Olympia

It is one of the ancient Seven Wonders of the World that was listed by Herodotus in his famous list. The statue was 12 meters (39 feet) tall. Herodotus said that statue occupied a whole room at western of the temple o Zeus in Olympia (about 150 Km west of Athens), the city where Greeks celebrated the original Olympics games.

The statue was made by the Greek sculptor Phidias (who made also the statue of Athena in the Parthenon) in honor to the king of the Greek gods and it was the most famous master piece of art of all Greece.

The statue was an ideal representation of the best classical style. It was made of ivory with gold plating. There are not copies of the statue; therefore we don’t know its exactly shape. But, the traveler Pausanias made around II century AD a detailed description of the statue and the throne on it rested. Besides, there are many Roman coins and engraved gems that represents to the Zeus at Olympia.

According to the description of Pausanías, the statue was wreathed with shoots of olive and it rested on a wonderful throne of cedar wood, which was ornamented with ebony, gold, precious stones and ivory. In his right hand a figure of Victory made from ivory and gold.

In his left hand, his sceptre adorned with precious metals and an eagle perched on the scepter. The sandals and the robe of Zeus were made of gold.

The temple that hosted the statue was constructed from 466 to 456 BC approximately and was designed by the Greek architect Libon who was native from Elis a town near Olympia. This temple was built with a classic Doric style very similar to the Parthenon in Athens.

Obviously the main piece in the temple was the statue, which was constructed around 432 by Phidias. Greeks thought, the statue was the incarnate god. This statue was very impressive and it was the most important chryselephantine sculpture (a cult statue of high status in the ancient Greece).

The legend says that Phidias was asked about what inspired him: If he went to Olympus to see Zeus or if Zeus was under from the Olympus to pose for Phidias. Phidias answered then that he was inspired by one of the verses of the Iliad of Homer: “He spoke, the son of Kronos, and nodded his head with the dark brows, and the immortality anointed hair of the great god swept from his divine head, and all Olympus was shaken”. 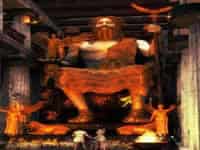 Because of the climate in Olympia, which was so damp, the statue required care so that the humidity would not crack the ivory. Therefore Phidias had the responsibility of the maintenance of the statue which was treated with oil constantly.

In the first century Caligula ordered to transport the statue to Rome, but this attempt failed because the scaffolding constructed to do this work collapsed.

The statue of Zeus presided the Olympics games until 393 AD, when the Roman emperor Theodosisus I decided to abolish the games and close the temple, because Rome became Christian and both temple and games were considered pagan manifestations.

The reasons and circumstances of the destruction of the statue are not clear. A tradition compiled by the Byzantine historian Georgios Kedrenos says that the statue was carried to Constantinople and was destroyed in the great fire in 475. Another version says that it was burned with the temple in 425 AD.

Recently between 1954 and 1958, archaeologists have found in excavations in Olympia several tools and terracotta mold with the inscription “I belong to Phidias” very near location where Pausanius said the Phidias’ workshop was. These objects have allowed to scientists to confirm the date of statue’s creation.

Now, there are several statues that maintain the spirit of the Zeus at Olympia, one of the most famous of them is the statue in honour to Abraham Lincoln in the Lincoln Memorial in Washington D.C. In this statue Lincoln is depicted seated on a huge throne as well as Zeus in the legendary statue of Olympia

The statue of the Zeus at Olympia and its history has been from 2500 years ago, a great source of inspiration for artists of all times and it is still now one of the most famous works of art of the history.