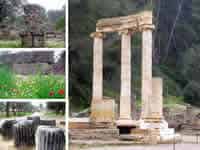 The ancient Olympia had many temples and ceremonial buildings like the hippodrome, the stadium, the Prytaneion (the seat of government), the Philppeion (an ionic circular memorial monument of ivory and gold, which contained statues of King Philip’s family.

Which was the family of Alexander the Great), the temple of Hera and the temple of Zeus, which hosted the famous statue of ivory of the father of the gods that was one of the seven wonders of the ancient world.

At west of the Sanctuary were the workshop of Phidias (the sculptor who made the statue of Zeus), the Gymnasion and the Leonidaion (the place where competitors were staying during the games).

The city had its greatest splendour in the classical period (from V to IV centuries). It was in this period when most buildings and temples were constructed. In the Roman period the Olympics games were opened to all citizens of the empire and some temples were restored and some other were built.

Olympia’s decline began in the III century AD when a series of earthquakes destroyed many buildings. Besides, also in the third century, several tribes raided and looted the city. Nevertheless, Olympic Games were realized until 393, when Christian Emperor Theodosius banned the games, because they were considered pagan. Then, the city was abandoned.

In the second half of the XX century an excavation leaded by the architect Alfred Mallwitz found the Phidias’ workshop and the Prytaneion, where he found many tools of bronze, which apparently belonged to the famous sculptor of the Olympic Zeus.

Now, modern Olympia is an small nice Town where the flame of the modern Olympic Games is lit using the reflection of the sunlight in a mirror in the stadium of Olympia, which has been restored. This flame is transported from Olympia to the seat of the Games, like Athens in 2004 or Beijing in 2008

The main mean of transport of the modern Olympia is the train. The city is the final east station of the line Olympia-Pyrgos. Besides, Olympia has one of the most important museums of Greece, the Archaeological Museum of Olympia, whose collection presents several vestiges of the Temple of Zeus and the ancient Olympic Games.

The town counts also with a great variety of hotels, shops, restaurants and bars. Its population is around 1000 people (it is very small). Olympia is today one of the most popular tourist destinations of the country; therefore there is an excellent tourist office on Praxitelus Kondylli, where it can change money and get schedules of buses, ferries and trains.