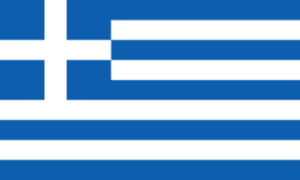 Greece is a country located at South of Europe, on the tip of the Balkan Peninsula, whose official name is Hellenic Republic. It has a great coastline and many islands in the Mediterranean Sea.

The Greek islands are usually divided into two groups according their location: the Ionian Islands (Leucas, Corfu and Cephalonia) at west and the Aegean Islands (Crete, Samos, Chios, Euboea and Lesbos) at east and south.

Greece has borders with Ionian Sea to the west, Turkey and the Aegean Sea to the east, Bulgaria, Macedonia and Albania to the north and the Mediterranean Sea to the south. The country has 11 216 708 inhabitants approximately, its capital is Athens and it is member of the European Union since 2001.

Greece has 3 kinds of climate: Mediterranean in the coast, Alpine in the mountain region (Northwestern Greece) and Temperate in the rest of the country. The capital Athens has a mix of climates (Mediterranean and temperate). The main religion is the Greek Orthodox with almost 97% of population. The Greek cuisine is very healthy and incorporates fresh ingredients like fish, cheese, dolmades, etc; besides, the country has also excellent wines.

Greece was the cradle of the Olympics Games; therefore It has a great sporting tradition. The main sports are Basketball and Football (soccer). The national team of Football was champion of the European Championship in 2004. This championship is considered one of the most important achievements in the history of the Greek sport

But Greece is famous in the world mainly because of its great and important history. This country is the cradle of the democracy and the Western thought. The first vestiges of culture in Greece, they dates from 2 000 years BC, when the Mycenaeans civilizations began their development. Around XII century BC, Dorians invaded the Greek Peninsula, and then it began a dark period known as Homeric epics, since it believes that the famous stories of Homer were created in this period.

The Greek classic period began around 750 BC when Greece was a set of city-states and it was in this age that Greece reached its peak in the V century BC with a great development of the art, literature, philosophy and politics.

It was also the age of great Hellenic personages like Pericles, Licurgo, Socrates, Platon, Aristoteles, Leonidas, Philip II and Alexander the Great the most great king of all times.

It is in this period that Herodotus created its famous list of the Seven Wonders of the World, some of them were in the current Greek territory (The statue of Zeus at Olympia and the Colossus of Rhodes).

Around the first half of the II century BC Greece declined because of the Roman invasion and all the country became a Roman province. By 330 AD the Roman and the Byzantine cultures were mixed in Constantinople that was the most important politic and military power until 1453 when the Byzantine empire was destroyed by the Ottomans

Between 1821 and 1829 after an Independence war Greece was separated of the Ottoman Empire and the Greek state was recognized in the London Protocol. The great powers of Europe Russia, France and Britain installed a monarchy in Greece.

In 1843 an uprising forced to the king to accept a constitution and a representative assembly. The monarchy held on despite popular opposition until the first decades of the XX century, although George I established new constitution in 1864 that returned democracy and pushed the king into a largely ceremonial role.

In the World War I Greece fought against Turkish nationalists, because of this war there has a massive population exchange between Greece and Turkey under the Treaty of Lausanne.

Many coup d’etats followed during 1930s until the World War II when in 1940 the Fascist Italy of Mussolini demanded the surrender of Greece, but the Greek dictator Ioannis Metaxas answered only with the Greek word “OXI” (no). Greece resisted Italian and German forces until the end of the war.

During the second half of the XX century Greece experimented very turbulent times, including a civil war. But, the country is now a Nation of the first world and member of the European Union. The country adopted the euro in 2001 and organized successfully the Olympic Games in 2004 in Athens.

Greece is today a country whose economy is based in tourism, shipping industries, constructions, telecommunications, banking and finance. The standard of life in Greece is very high with an average per capita income of $35 166 by year.

Greece is a country that definitely worth visiting because of its wonderful culture, its history, its beautiful landscapes and its hospitable people.