This wonder of the ancient World was located in the Greek Island of Rhodes. It was a giant statue of bronze, constructed in the III century BC as the representation of the god Helios.

According to the legend, the Island of Rhodes was famous for its technology advances , mainly war machines. One of the examples of this technology was the Colossus of Rhodes. Is believed that this statue was approximately as large as the Statue of Liberty in New York, whose creator the French sculptor Auguste Bartholdi was inspired by the ancient wonder of the world.

The statue would have been located at the entrance of the harbor of the island of Rhodes. The statue’s base was made of white marble; the pedestal was 50 feet height (approximately 15 meters). The feet of the statue were carved in stone and later they were covered with bronze plates riveted. The bronze skin parts were made by workers using casts, later individual plates of bronze were joined together by through holes made during the molding to form a series of rings.

The structure was gradually erected and the bronze form was fortified with an iron and stone framework. The higher parts were constructed using an earth ramp which was built around the statue; this ramp was removed when the colossus was finished. Nevertheless, another theory proposes that the upper parts were built using towers and scaffolding. Is said that The Colossus of Rhode was 110 feet (33 m) height when was completed.

There is a misconception about the appearance of the Colossus. It has been believed that the statue stood in front of the Mandraki harbor straddling its entrance. But, considering the colossus’s height and the wide of the harbor mouth, this image is almost impossible; this posture was a figment of medieval imaginations based on texts, like “over land and sea”. The Colossus would probably have been in an upright position with its legs together.

After Alexander’s death, his generals fought for the control of the empire. Rhodes became allied of Ptolemy who had taken control of Egypt. Thanks to this alliance Ptolemy controlled much of the trade in the eastern Mediterranean. But Antigonus (one of the generals of Alexander) was upset by this fact; therefore in 305 BC Antigonus and Demetrius (another Alexander’s general) invaded Rhodes with 40 000 men and besieged the city using giant catapults and Helipolis (an enormous wheeled fortified tower, which was 50 feet square at its base and around 100 feet tall and was armed with catapults and sling throwers).

Nevertheless, defenders of Rhodes resisted the attacks only with 7000 men, until 304 BC when a force of ships sent by Ptolemy arrived and defeated Demetrius’s army saving Rhodes. The Rhodians were so grateful; therefore they decided to build a giant statue of the sun god Helios (Apollo) to celebrate the victory. 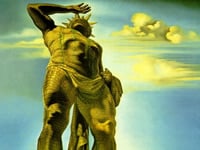 The statue was designed and constructed by the Rhodian sculptor Chares of Lindos, who has been involved with large scale statues before. The construction of the statue lasted 12 years around 282 BC. It was said that 13.6 tons of bronze and 8.2 tons of iron were used in the construction; therefore it was a shortage of bronze in the ancient world during colossus’s construction.

Nevertheless the statue stood in Rhodes only by 56 years, since an earthquake in 226 BC destroyed the colossus which was snapped at the knees and fell over onto land. According to the legend Ptolemy III offered to rebuild the statue but a Rhodian oracle was afraid that it upset Helios, therefore the statue was never reconstructed.

Remains of the colossus were on its site around 800 years and they impressed to the travelers that saw them. In 654 AD, Arab forces invaded Rhodes and they sold the remains of the statue to a salesman from Edessa, who transported the bronze scrap to his home using 900 camels.

In 1989 media reports suggested that some big stones on the seabed of the Rhodes’s coast could have been remains of the famous statue, but some time later this theory was absolutely discarded.