The Lake Baikal is the deepest freshwater lake of the planet and the largest reservoir of fresh surface water. Its famous clear waters host a great diversity of flora and fauna.

This lake is located in Asia and is part of the territory of Siberia in Russia in the boundary of the Russian provinces of Buryat Republic and Irkutskaya, near Irkutsk city. The Baikal Lake is considered by CEDAM one of the seven underwater Wonders of the World. The name Baikal, derives from two words of the Turk language, “bai” that means “wealthy” and “kul” that means “lake”.

The maximum width of the lake is 79.5 kilometers, its width minimum is 25 kilometers and it width medium is 47.8 kilometers. The lake lies along a tectonic break, which explains its great depth. The maximum deep of the lake is 1637 meters, which make this lake the deepest of the world, nevertheless its average deep is 758 meters.

The Lake covers an area of 31722 square kilometers. Around 330 rivers flow their waters into this lake, being the most important the Selenga, Upper Angara and Barguzin rivers. Inside the lake there are also 22 islands, the largest island is Olkhon. It calculates that the lake contains around 23 615.390 cubical kilometers of fresh water almost 20% of the world surface fresh water reserves.

It contains more water than all the North American Great Lakes combined. It is also the oldest lake of the world; since, this lake has existed since 25 million years ago.

One of the main features of the Baikal Lake is the clearness of its waters; the water is so clear that any object can be seen well at the depth of 40 meters. Besides, Baikal Lake is one of the most beautiful lakes of the planet and it is one of the few lakes that is still growing; the lake grows with an average speed of 2 cm per year (0.8 inches).

The lake hosts an impressive unique flora and fauna. Scientists have identified about 2600 species of animals and plants and almost 70 per cent of them are endemic that means, they only can be found in this lake. One of the most representative inhabitants of the Baikal’s ecosystem is the Nerpa (Phoca sibirica), a unique freshwater seal which lives in the northern zone of Baikal and in the Ushkanye islands.

Another symbol of the Baikal’s fauna is the Omul, the most popular salmonid fish of the lake. Other representative specie of the lake is the Golomyanka also known as Baikal oil fish, an unusual beautiful fish, which is a translucent fish that live in depths between 200 and 500 meters, this kind of fish is famous for disintegrating and become a mass of oil and bones when they are exposed to sunlight. The region is inhabited also by foxes, eagles, deer, bears, and many others animals and plants.

The lake itself is a true wonder; but, besides it is surrounded by a marvelous landscape composed by rocky mountains and beautiful forests; therefore is one of the favorite places in Russia to do activities such as trekking, camping, kayaking, biking, fishing, etc.

About the Lake Baikal, the famous Russian writer Anton Chekhov said: "Baikal is amazing, and it is not without reason that Siberians refer to it not as a lake, but as a sea.

Its water is unusually transparent, so that one can look though it as through air; its color is a soft-turquoise, pleasant to the eye. Its shores are mountainous and forest-covered; impenetrable wilderness all around. A profusion of bears, sable, wild goat and all sorts of wild thing".

Since ancient times many people had been living near Lake Baikal. There are vestiges of human presence in the region that date from the Stone Age, the first inhabitants of the region, considered the lake a sacred place, therefore Lake Baikal was known as Sacred Water or Sacred Sea and the people prayed and believed in the lake’s power.

But, the major migration of people to the Lake Baikal’s region occurred after the Russian discovery of the lake in the XVII century. In 1643, the Cossack Kurbat Ivanov was the first Russian that arrived to the eastern Siberian. In 1647 Vasily Kolesnikov led an expedition that reached the Baikal’s northern coast. 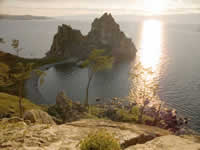 Since the beginning, the Russian people developed an economy integrated to the lake, which was based in the fishing, nut gathering and hunting that means Lake Baikal has been the base of the region’s economy.

Since its discovery, many expeditions explored the Baikal Lake, one of the first was the scientific expedition sent by Peter I in 1723. In that time most scientific works about the lake were published by the Saint Petersburg Academy. However, only in the XIX century because of the construction of the Trans- Siberian Railway; systematic geographical and geological explorations were realized in the Baikal Lake.

During the XX century, many other researches were done in the lake including a complete exploration organized by the Academy of Sciences. In 1976, the first satellite photography of Baikal Lake was taken. Nevertheless, despite all the expeditions and the long time that the lake has been explored, many questions and mysteries about Baikal Lake still keep.

The Baikal Lake was declared World Heritage by UNESCO in 1996. Unfortunately in the 50 last years, the creation of many civil and industrial settlements has generated devastating pollution in the “Sacred Water”, generating a terrible impact in the delicate ecosystem of the Baikal Lake.

The garbage, chemical waste derived from the agriculture and the growing of stream of tourists as well as the creation of pulp and paper plants are damaging the largest fresh water reservoir of the Earth.

Because of the growing contamination, authorities are taken some measures to protect the lake; such as, forbidden the logging of timber and the timber’s transportation over the Baikal Lake. Several industries in the Buryat Republic have been converted to close cycle water system to stop the contamination and the population around the lake is educated in order to protect the natural environment.

But, these politics are insufficient to combat against the threat over the Baikal Lake. Currently the two main pollution menaces are the Ulan- Ude town and the Baikal’s Pulp and Paper Factory.

The future of this wonder of the nature depends now of the decisions of our generation. It is our responsibility fighting for the preservation of places like the wonderful Lake Baikal.