The ruins at Cluny Abbey in France were once the scene of a major monastic movement during the middle ages. The largest Christian building was its church until St. Peter’s Basilica was rebuilt in Rome. The site also includes pleasant gardens and a museum with Romanesque artefacts.

Now the site offers a prestigious heritage, after nine centuries of monastic life including a Museum of Art and Archaeology housing Romanesque sculpture, a Medieval City rich in Romanesque and Gothic houses, two churches and a superb Hôtel-Dieu(hospital) offering a remarkable fresco by Chaimowicz.

Controlling over 10,000 monks from Poland to Scotland, the monastery was once the greatest power in Europe, which started by the Benedictine monks in 940AD. So large buildings had to be erected to house everyone and 40 farms produced the food.

Today the abbey is a ghost of the past and only one tenth of the gigantic cathedral remains. One of the architectural tragedies of history was the damage done during the French Revolution with the burning of the Church furnishings and the wracking of the tombs. It was in great part demolished under the First Empire but a high octagonal tower, the chapel of Bourbon and the ruins of the apse still remain.

Around 1750 the abbey buildings were rebuilt and now contain a technical school. Part of the site of the church is given up to the stabling of a government stud. The abbot’s palace serves as hotel-de-ville, library and museum.

Entrance arches at the ruins at Cluny Abbey was founded in 910 and was built on a forested hunting preserve donated by William I the Pious, duke of Aquitaine and count of Auvergne.

He relieved the monks of Cluny of all obligations to him except for their prayers for his soul but it was much more common for patrons to retain some proprietary interest in the abbey and they usually expected to install their relatives as abbots. 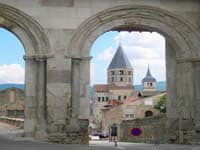 It was founded by Benedictine monks who offered perpetual prayer, emphasising liturgy and spiritual pursuits over labour and other monastic activities.

When monasteries were founded in the Cluniac tradition, these were designated “priores” not abbeys, and were accordingly overseen by a prior who reported to the abbot of Cluny, before the most monasteries were autonomous and associated with others only informally. This system worked well and around 1016 the Pope decreed that the privileges of Cluny also extended to subordinate houses.

In 1088 the construction of third abbey church began and its one that still stands in part today. For centuries it was the largest church in Christendom.

In the 12th century at the top of its influence, Cluny became in the head of a monastic empire with 10000 monks. Four of popes were abbots of Cluny, and the Pope Urban II declared to Cluny as “the light of the world”.

The success of it abbey was due to its abbots who are educated drawn from the highest aristocratic circles, two of whom were canonized: Odo of Cluny, the second abbot (died 942) and Hugh of Cluny (died 1109). Odilo, the fifth abbot (died 1049) was a third great leader.

However the order began to lose momentum under poor government, but subsequently it was revitalized under Abbot Peter the Venerable; its monks became bishops, legates and cardinals throughout France and the Holy Roman Empire. But soon, new austere orders such as the Cistercians were generating the next wave of ecclesiastical reform.

At the same time, the rise of English and French nationalism created a climate unfavourable to the existence of monasteries autocratically ruled by a head residing in Burgundy.

The Papal Schism (1378-1409) further divided loyalties: France recognized the pope at Avignon and England that at Rome, interfering with the relations between Cluny and its dependent houses in England. Under the strain, some English houses, such as Lenton Priory, Nottingham, became officially English, weakening the Cluniac structure.

By the time of the French Revolution, the monks of Cluny were so thoroughly identified with the Ancien Régime that the order was suppressed in France and the monastery at Cluny was partly demolished. The abbey was sold as national property and was used as a stone quarry. It was systematically dismantled until 1823.

Most of the great Abbey of Cluny stands in ruins, but it still suggest the size and glory of the abbey at its zenith, and imagining it as it once was is part of the attraction.

The Porte d’Honneur is the best place to start, which is the entrance to the abbey from the village. The pilasters and Corinthian columns of the Clocher de l’Eau-Bénite that is a majestic bell tower, reflects its classical architecture.

A national horse-breeding center on one side of the transept was founded by Napoleon in 1806 and constructed with materials from the destroyed abbey.

The other side is an elegant pavilion built as monastic cloisters in the 18th century. Once ago the gardens contained an ancient lime tree which was destroyed by a storm around 1982, named Abelard as the controversial French philosopher who sheltered at the abbey in 1142.

The 13th century flour store is on the right, with its fine oak and chestnut roof and collection of exquisite Romanesque capitals from the vanished choir. The Musée Ochier contains masterpieces of Romanesque sculptures.

Remains of both the abbey and the village constructed around it are conserved here, as well as part of the Monk’s Library.