Guilin is regarded in China as the country's most picturesque city; it is situated in the northeast of the Guangxi Zhuang Autonomous Region on the west bank of the Li River.

Guilin is built around its two crystal clear rivers and lakes that are inter-connected, which is encircled by mountains with curious and bizarre rock formations and caves. Many distinctive bridges zigzag the waterways.

Its name means "forest of Sweet Osmanthus", owing to the large number of fragrant Sweet Osmanthus trees located in the city. Guilin is an important cultural city with a history encircling more than 2000 years. The city has been the political, economic and cultural centre of Guangxi since the Northern Song Dynasty (960-1127). 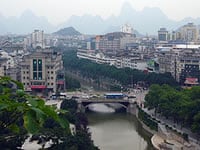 The Guilin Government area covers an area of 4,195 square kilometres. It is in a basin surrounded by the Yuecheng Range, Ocean Hill, Jiaqiao Range and Tianping Hill.

The main artery is Zhongshan Lu, which runs roughly parallel to the river on its western side. At the southern end of this street is Guilin Railway Station. The city centre is dominated by the central square which is surrounded by a number of good class hotels, shopping precincts and commercial buildings.

Its economy is based on its own natural resources; the main mineral deposits of Guilin city are iron, aluminium, zinc, barite, talcum, and limestone. The industries of Guilin mainly include machinery, rubber, textile, food processing, medicine, and electronics. Tyres and electric meters manufacturing are playing an important role in China. Handicraft industry is flourishing here. Guilin's chief farm products are rice, corn, sugarcane, fruit, and vegetables.

Guilin is a well-developed tourist centre with convenient transportation, communication and accommodation facilities. There are more than 30 scenic spots within the boundaries of Guilin. Major attractions include Elephant Trunk Hill and Reed Flute Cave, with remarkable stalactites and stalagmites. Seven-Star Park, which dates from the Sui Dynasty in 1000.

There are two fantastic caves in the area, the seven star rock caves, which derives its name from the arrangement of surrounding peaks similar to the pattern of the stars of the Great Bear constellation, and Reed Flute Cave named after the reeds growing around the cave mouth. Both contain spectacular stalactites and stalagmites.

The city also boasts other beautiful hills, such as the Fubo Hill, which is supposed to restrain the waters of the Li Jing River and Nanxi Hill that stands magnificently like a huge screen.

Erlang Gorge is a huge cliff, this is the famous "Picture Hill" that resembles horses of different colors in different positions. On the right, after passing Picture Hill, is Huangbu (Yellow Cloth) Beach. Here the river is wide and flows gently. Seven graceful peaks are likened to seven quiet young girls standing shoulder to shoulder.

Guilin has a subtropical climate; the mountains are wrapped in a rich green covering of bamboo trees and are often enveloped in an almost unnatural, strange fog. Once outside of Guilin’s city gates, the quiet rural landscape makes you feel as though you’ve gone back in time thousands of years to a place unknown to modern man.

Guilin is the perfect place for those who enjoy walking and which may also enjoy one of the most fascinating experiences that are travelling in its beautiful river and lakes.