Suzhou is located in the center of the Yangtze Delta, in the south of Jiangsu Province, with Shanghai to the east, Zhejiang Province to the south, Wuxi City to the west and the Yangtze River to the north.

Suzhou was the capital of the kingdom of Wu from the 12th to 4th centuries BC. Built in 514 BC, Suzhou is an ancient city with a 2500 years' history. The unique characteristics of the past are still retained in present day in Suzhou.

More recently, it has been a center of the silk trade and a place of gardens and canals. It is known also such as The Venice or as The Paris of the East. Suzhou for a lot of time it has been an asylum for scholars, artists, and expert craftsmen, which remains still even today

An area of 42% of the city is covered by water, including a vast number of ponds and streams, Suzhou is praised as the 'Oriental Venice'. Taihu Lake is one of the four largest fresh lakes in China.

By its soft climate, fertile landscape, abundance of products, and an available destination the whole year, it is known like 'Suzhou the paradise on the earth'. The average temperature is 15.5 degree celsius; the average precipitation is 1,100mm. Suzhou abounds in water and soil. And also, there is mountain soil, glass sand, zinc, lead, rock and so many other mineral resources. 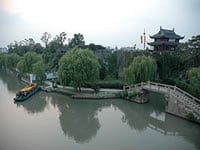 Suzhou City was one of the most prosperous Chinese cities, both in agricultural production and domestic and foreign trade. Also it is an important center for China's silk and wool industry.

The silk knit goods here are in the first place in China. The export of silk can occupy 30 percent in the whole country. It is also the base of electric industry; the country industry is developed.

At the same time Suzhou has grown into a major center of joint-venture high-tech manufacturing and currently boasts one of the hottest economies in the world. It is the world's largest single producer of laptop computers.

The Suzhou Industrial Park (SIP) in the east, and the Suzhou New District (SND) in the west, is home to factories from numerous North American, European, East Asian, and Australian companies.

The city is famous for its enriched culture, beautiful classical gardens, and traditional architecture. The Lion Grove Garden, The Surging Wave Pavilion, The Lingering Garden, The Garden of Pleasure, and Mountain Villa are some of the popular ones that feature majestic views among, the huge group of gardens.

The Gardens to the south of Yangtze River are the best in the world, and Suzhou gardens are the best among them. At present more than 60 gardens are kept intact in Suzhou, and a series of them have been listed in the World Heritage List, including the Humble Administrator's Garden, the Lingering Garden, the Garden of Master of Nets and the Mountain Villa with Embracing Beauty.

In recent years, the basic facilities in Suzhou have been improved remarkably and the functions of a tourist city have been perfected day by day. Tours to the ancient towns of Jiangnan or south of Yangtze River have been promoted by a series of festivals like Kunshan Zhouzhuang International Tourism Art Festival, Wujiang Tongli Spring Tourism Cultural Festival, Luzhi Apparel Cultural Tourist Festival.

These not only make Suzhou better known to the world, it also facilitates the development of the local economy in addition to showing the rest of the world customs.