Shanghai which means "above the sea" is located on China's central eastern coast near the mouth of the Yangtze River at halfway along China's eastern coastline, and covers an area of 5,800 square kilometers.

It borders the estuary of Yangtze River to the north, Jiangsu and Zhejiang Provinces to the west and Hangzhou Bay to the south.

Due to its beneficial geographical location, Shanghai has become a large and rich port city and one of the largest urban areas in the world, with over 20 million people in its unlimited metropolitan area.

Originally a fishing and textiles town, Shanghai grew in importance since 19th century, due to its favourable port location and as one of the cities opened to foreign trade by the 1842 Treaty of Nanking. Shanghai has been a political hub of China since the 20th century. By 2006, Shanghai's actual level of autonomy has arguably surpassed that of any autonomous regions. 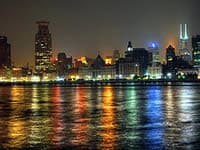 Today, Shanghai is mainland China's center for commerce and finance, and has been described as the "showpiece" of the world's fastest-growing economy.

Modern development began with the economic reforms in 1992, a decade later than many of the Southern Chinese provinces, but since then Shanghai quickly overtook those provinces and maintained its role as the business center in mainland China. Shanghai also hosts the largest share market in mainland China.

Shanghai container traffic has surpassed Hong Kong to become the second busiest port in the world, behind Singapore. Shanghai and Hong Kong are rivaling to be the economic center of the Greater China region. Hong Kong has the advantage but Shanghai has stronger links to both the Chinese interior and the central government, and a stronger base in manufacturing and technology.

Shanghai has increased its role in finance, banking, and as a major destination for corporate headquarters, fueling demand for a highly educated and modernized workforce.

Also it is an emerging tourist destination renowned for its historical landmarks such as the Bund and Xintiandi, its modern and ever-expanding Pudong skyline including the Oriental Pearl Tower, and its new reputation as a center of culture and design.

As in many other areas in China, Shanghai is undergoing a building boom. In Shanghai the modern architecture is notable for its exceptional style, especially in the highest floors, with several top floor restaurants which be similar to flying saucers.

The city has many rivers, canals, streams and lakes and is known for its rich water resources as part of the Taihu drainage area. The highest point is at the Peak of Dajinshan Island at 103 m. Air pollution in Shanghai is low compared to other Chinese cities such as Beijing, but the rapid development over the past decades means it is still high on worldwide standards, comparable to Los Angeles. 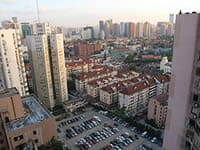 Shanghai has a humid subtropical climate.

In winter, cold northerly winds from Siberia. Summer is very warm and humid, with occasional downpours or freak thunderstorms. The city is also susceptible to typhoons. The most pleasant seasons are spring, although changeable, and autumn, which is generally sunny and dry.

Most registered Shanghainese residents are descendants of immigrants from the two adjacent provinces of Jiangsu and Zhejiang, regions that generally also speak Wu Chinese. The many migrants coming to Shanghai from inland China have raised tensions in the past decade; often they do not speak the local dialect and for that reason use Mandarin.

The argot language is Shanghainese, a dialect of Wu Chinese, while the official language is Standard Mandarin. The local dialect is mutually incomprehensible with Mandarin, and is an inseparable part of the Shanghainese identity.

Shanghai has a rich blend of religious heritage as shown by the religious buildings and institutions still scattered around the city. Taoism has a presence in Shanghai in the form of several temples, including the City God Temple, at the heart of the old city, the Wenmiao, dedicated to Confucius, and a temple dedicated to the Three Kingdoms general Guan Yu.

Buddhism has had a presence in Shanghai since ancient times. Longhua temple, the largest sanctuary in Shanghai, and Jing'an Temple, were first founded in the Three Kingdoms period. Another important temple is the Jade Buddha Temple, which is named after a large statue of Buddha carved out of jade in the temple.

Shanghai is also an important center of Christianity in China. Churches belonging to various denominations are found throughout Shanghai and maintain significant congregations. Among Catholic churches, St Ignatius Cathedral in Xujiahui is the largest. The city is also home to Muslim, Jewish, and Eastern Orthodox communities.

Shanghai continues to develop at an incredible speed. It will host the football preliminary of the Beijing Olympics in 2008 and the World Expo in 2010, both of which offer the means to introduce Shanghai to yet more people worldwide.

There is every reason to wait for Shanghai to continue to surprise the world.