Turpan is located at the southern foot of the Tianshan Range in the eastern part of Xinjang; a key point on the ancient silk road. It is an old city with a long history that means "fertile land".

It was called Gushi in ancient times, the state of South Cheshi and South Cheshi was set up during the Han dynasty, was known as Gaochang Prefecture during the Liang dynasty, as the State of Gaochang during the Northern Wei dynasty and gained its current name "Turpan" in the Ming Dynasty, now it is well-know as the "City of Grapes".

Turpan once served as a trade and Buddhist center on the ancient Chinese Silk Road. The Jiaohe Ruins, Ruins Gaochang, Bezeklik Thousand Buddha Caves, Sugong Ta / Emin minarets, Astana Tombs attest to the thriving city of the past.

Turpan is encircled by high mountains on all sides, this area is inhospitable and rugged with, it is immune from moist currents. It has very unique landscape. Eons of wind erosion, frost and rainwater have sculpted the place's into marvelous shapes. The famed Flaming Mountain, gorgeous Tuyugou Canyon, Aikxun Yadan are good examples of those natural wonders. 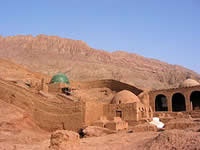 Today, Turpan is a small town, an oasis that was a strategic location for China, it occupied along the Silk Road, but it is now evident, thanks to a still-standing Buddhist monastery and a number of Islamic mosques.

It is considered to be the hub between Xinjiang and the eastern part of China. Transportation in Turpan is very convenient, with trains and buses available for visitors.

As well as the usual vehicles, there is a special 'donkey taxi' here. It is a kind of flatbed drawn by donkey. Visitors can sit and ride on the vehicle to get a broad overview from a leisurely look around the city.

Turpan abounds with a wealth of cultural heritage and has numerous sites of historical interests. This include the ruins of the acient cities of Yarkhoto and Qoco, the Astana Cemetery, Lord Su's pagoda,a dn the Buzkirik Tousand-Buddha grottoes.

Turpan has been a land of songs, different arts, custom, traditions and dances since ancient times. People would gather around into singing and dancing whenever they hear the beats of music and drums; singing and dancing. Visitors are entertained during festivals with rich and varied folklore celebration activities.

The oasis of Turpan produces hundreds of thousands of tons of grapes a year and is internationally known for the variety and multiple colors of the grapes, watermelons, cantaloupe, apricots and raisins, these fruits are widely known for its high sugar content, especially grapes.

The abundant sunshine gives the melons and grapes ideal conditions to grow. Turpan is known as the 'Hometown of Grapes' and the Grape Valley where is a good place to enjoy hundreds of varieties, so that many people come here in summer when the grapes are ripe.

Turpan is also renowned throughout the world for its underground irrigation system which makes it possible for agriculture and oasis to thrive under harsh natural conditions.

The annual average temperature is 14 C. It is reckoned that there are 152 summer days on average, and 28 really broiling days with the temperature above 40ºC. Although the high temperature can be oppressive people can also get some benefits from it. Rain is such a rarity in summer. Autumn is also a best time to visit Turpan, when there are clear skies, brisk air, and lesser winds.