Wuhan is the capital of Hubei province, and is the most populous city in China. It is situated in the heart of China. It lies at the east of Jianghan Plain, and in the intersection of the middle reaches of the Yangtze River and Han River.

With a history that dates back more than 3500 years, Wuhan is one of the cities more famous of China both for its History and its Culture. In the 1920s, Wuhan was the capital of a leftist Kuomintang (KMT) government led by Wang Jingwei in opposition to Chiang Kai-shek.

The city of Wuhan, first termed as such in 1927. Wuhan is known as the "thoroughfare of nine provinces"; it is a major transportation hub, with dozens of railways, roads and expressways passing through the city. 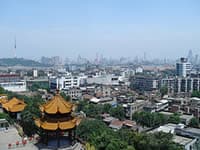 The geography of Wuhan is pretty special, it comprises three parts: Wuchang, Hankou, and Hanyang. They are commonly called the "Three Towns of Wuhan" also the giant Yangtse River (Chang Jiang), the world's third longest river, pass through the city.

These three parts face each other across the rivers and are linked by bridges. And around East Lake you will find historical sites and beautiful nature. The main landmark inside the city is the Yellow Crane Tower a modern construction built on the site of five previous incarnations. It is considered one of the four great towers in China.

Also Wuhan is a modern metropolis with unlimited possibilities. It is an energetic city, an important functional center for economy, education, transportation, industry, finance, culture, information and technology with many international companies located there.

Having scientific, technological and educational institutions such as Laser City and the Wuhan University, the city is also an intellectual centre. The comprehensive strength of science and technology ranks the third in China.

However tourism is also a very important industry there. You will get to see several tourist attractions in the city.

Some of the major places are the Hall in Which Waves Can be Heard, Hill of the Nine Heroines, Lake Scenery Pavilion, Lakeside Gallery, Provincial Museum Guqin Tai Terrace, Mount Hongshan, Shenxiang Baota Dagoba, Strolling and Reciting Pavilion, Temple of the Regained Perfection, Tortoise Hill and many others.

Wuhan's climate is a subtropical monsoon one with abundant rainfall and distinctive four seasons. The average temperature in July is 37.2°C, and the maximum often exceeds 40°C. Spring and autumn are generally mild, while winter is cool with occasional snow.

Also Wuhan offers full resources. It has abundant lodging, recreational activities, and restaurants for travelers. There are also many fun things to do in the city.