Xi’an is the capital of Shaanxi Province and a sub-provincial city; it is located in the southern part of the Guanzhong Plain.

The city is bounded by the Qinling Mountains to the south, the Weihe River to the north and the Qinling Ranges in the south; it is in a favourable geographical location surrounded by water and hills. Xi'an is one of the four ancient cities in the world, the other three being Rome, Athens and Cairo. 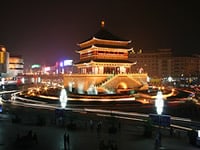 The city has more than 3,100 years of history. Xi'an was one of the four Great Ancient Capitals of China because it has been the capital of 12 dynasties throughout more than 1,000 years of the History of China, some of these dynasties include the Zhou, Qin, Han, the Sui, Tang dynasties.

Xi'an was the starting point of the Acient Silk Road that extended from Asia to Europe and played an important role in cultural exchange between the East and West in ancient times.

Since the 1990s, the City of Xi'an has reemerged as an important cultural, industrial and educational center of the central northwest region; thanks to the facilities of research and development as the national security and the program of spatial exploration of China. The city's high technology enjoys remarkable advantages especially in space technology, electronic information, electro-mechanical integration, new materials and energy-saving technology.

The Terracotta Warriors and Horses is a Mausoleum of Emperor Qin Shi Huang and is listed on the World Heritage List. Old Banpo Village Remains from the Neolithic Age, and the Forest of Stone Steles that holds 3,000 stone steles of different periods from the Han Dynasty to the Qing Dynasty.

The Famen Temple enjoys the reputation of being the “forefather of pagodas and temples in Central Shaanxi”, because it holds the fingers bones of Sakyamuni, the founder of Buddhism. The Bell Tower is the geographical center of Xi’an, and the four main streets are respectively Dong Dajie, Xi Dajie, Nan Dajie and Bei Dajie which are also the main commercial streets.

Xi’an has many temples as Ba Xi’an an Monastery is an important and popular spot celebrating Taoism; Daxingshan Temple is one of the oldest Buddhist temples in China; Green Dragon Temple is a notable Buddhist temple built in Tang Dynasty (618-907). Xiao Zhai, the busiest commercial area, is in the southern part of the city and is popular with both youths and students since many universities are located here. 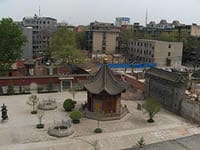 That is why there are a lot of shopping outlets for locals and tourists alike and also the entertainment activities are pretty colorful.

The Northern Square of Big Wild Goose Pagoda opens a beautiful music fountain that is said to be the largest in Asia. The popular local Shaanxi Opera can also be heard in some large theatres. Another kind of entertainment like the KTV, pubs, teahouses, cafes and bowling alleys can also be easily found in Xi’an.

The local food is also worth trying. The popular ones are Yang Rou Pao Mo, Rou Jia Mo, Dumpling Banquet and various noodles. To taste the local snacks, you must visit the night market of Nanshao Gate and Dongxin Street, as well as the Muslim Street.

Xi’an is a fertile land with comfortable climate. Summers are usually hot and wet, and winters tend to be cold and dry. July to September is the wet season and the average yearly temperature is 13°C. Spring and autumn or the months from March to November are the best tourist season.

Xi'an is the first option if you want to learn about of the extensive and fascinating history of China due to the fact that Xi'an is one of few cities that its historical heredity you preserve.