Ürümchi or Ürümqi is located at the foot of the snow-capped Tianshan Mountain Range, Urumqi is the capital of Xinjiang Uygur Autonomous Region in northwest of China. The place became known to foreign visitors mainly for its role as the last stopover along the "Silk Road".

As the capital city of the Xinjiang Uygur Autonomous Region, Urumqi includes five districts and a the Urumqi County. Because of its particular position, it is a transportation hub for linking the south and north area of the Tianshan Mountains as well as connecting Xinjiang and central China.

The largest city in the western half of the People's Republic of China, Ürümqi has won a place in the Guinness Book of Records as the most remote city from any sea in the world at a distance of about 1,400 miles (2500 km) from the nearest coastline. 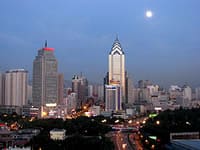 Spring is refreshing while a little cold. It snows occasionally. Summer is beautiful when flowers are in full boom and grasslands turn to green.

Autumn is the best season to visit Urumqi when the city is shrouded by colors and scent of ripe fruits. Snow is common in winter and it's very cold.

Ürümqi is a major industrial center within Xinjiang. It is also the largest consumer center in the region. According to statistics, Urumqi ranked 7th in 2007 by the disposable income for urban residents among cities in Western China. As the economic center, Urumqi has continuously developed its economy, industry, culture as well as tourism and transportation since the 1990s.

Urumqi is a multi-national city, where 43 ethnic groups reside. The city's rich cultural diversity is demonstrated by many ethnic minorities in the area. Han, Uygur, Hui, Kazak, Manchu, Sala and Mongolian people are all represented in this culturally diverse region.

Tourist resources of Urumqi have its own advantages and distinctions, which are strategically important in the ancient Silk Road that assembles the cultures of both eastern and western countries.

The most famous tourist spots among the numerous cultural relics and natural landscapes include the Heavenly Lake, the Southern Pastures, the Red Hill, the Southern Mosque, the Tartar Mosque, and the Xinjiang Regional Museum.