Beijing is the capital of China and also its second largest city, after Shanghai. It is located in the northern part of the North China Plain and its terrain is high in the northwest and low in the southeast. King Wu was the first to declare Beijing the capital city in 1057 BC.

Subsequently, the city has gone by the names of Ji, Zhongdu, Dadu, and finally Beijing when the Ming Dynasty Emperor ChengZu chose the name in 1421. Before 1949, Beijing was known as Peking by the Western world. After 1949, the city's name returned to Beijing, as it is known today.

Beijing has a whole area of 16808 kilometres, stretching 160 kilometres from east to west and over 180 kilometres north to south. It has 18 districts and counties with Dongcheng, Xicheng, Xuanwu, Chongwen, Chaoyang, Haidian, Fengtai and Shijingshan in the surburbs and Fangshan, Mengtougou, Changping, Tongxian, Shunyi, Daxing, Huairou, Miyun, Pinggu and Yianqing in the outer suburbs.

The climate in Beijing is of the continental type, with cold and dry winters and hot summers. January is the coldest month (-4 Celsius), while July the warmest (26 Celsius). The best season for travel is at the turn of summer and autumn, in September and October, when temperatures cool down and range from 15-20 degrees (59-68F), when the people can enjoy bright sunshine and blue skies. 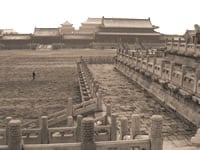 The Great Wall of China stretches along the northern part of Beijing Municipality, which is the greatest tourist attraction for the visitors coming to the city.

Another attraction in the city is the ‘Forbidden City’, which is centrally located in Beijing. It is the ancient imperial palace of the emperors of China and is famed to be the world’s largest surviving palace complex. Beijing is one of the cities that of one or the other way it attracts visitors worldwide.

Beijing is the center of the national, cultural politics and of international changes, a modern metropolis full of vitality. The earliest record of the world of Beijing came from the notes of trips for Marco Polo, the young Italian traveller in 13th century. His description of civilized people and his admiration for the beauty of the city, attracted the dream of numerous people on this ancient capital of civilization in the East.

Together with Xian, Luoyang, Kaifeng, Nanjing and Hangzhou, Beijing is one of the six ancient cities in China. It has been the heart and soul of politics and society throughout its long history and consequently there is an unparalleled wealth of discovery to delight and intrigue travellers as they explore Beijing's ancient past and enjoy its exciting modern development.