The Great Wall of China is a series of stone and earthen fortifications in China, built, rebuilt, and maintained between the 5th century BC and the 16th century to protect the northern borders of the Chinese Empire during the rule of successive dynasties.

The steps that form the Great Wall of China are very steep and tall in some areas. Tourists often become exhausted climbing the wall and walk no more than a kilometre or two (around a mile). In some areas the blocks were cemented with a mixture of glutinous rice and egg white. In the extreme western desert locations, where good materials are scarce, the wall was constructed from dirt rammed between rough wood tied together with woven mats.

It is the world's longest human made structure, stretching over approximately 6,400 km from Shanhaiguan in the east to Lop Nur in the west, along an arc that roughly delineates the southern edge of Inner Mongolia, but stretches to over 6,700 km in total. It is also the largest human made structure ever built in terms of surface area and mass.

Three sections are in Beijing municipality, which was renovated and which is regularly visited by modern tourists. One of the most striking sections of the Ming Great Wall is where it climbs extremely steep slopes. It runs 11 kilometres long, ranges from 5 to 8 meters in height, and 6 meters across the bottom, narrowing up to 5 meters across the top. Wangjinglou is one of Jinshanling's 67 watchtowers, 980 meters above sea level.

South East of Jinshanling, is the Mutianyu Great Wall which winds along lofty, cragged mountains from the southeast to the northwest for approximately 2.25 kilometers. It is connected with Juyongguan Pass to the west and Gubeikou to the east.

Another notable section lies near the eastern extremity of the wall, where the first pass of the Great Wall was built on the Shanhaiguan, the first mountain the Great Wall climbs. Jia Shan is also here, as is the Jiumenkou, which is the only portion of the wall that was built as a bridge.

The construction of the Great Wall China began in the 7th century B.C., under the Dynasty Zhou. This wall was constructed along many hundreds of years. The first version of the wall was constructed to support invaders far from the villages that cultivate the land for the Chinese border. These walls were constructed in weak points in the natural landscape or where the threat was perceived like the major one.

Some of these walls eventually became of greater strategic importance when the localised defences were gradually joined to form the Great Wall of China. At those times that the Chinese territory expanded northward, earlier walls became secondary defences when a more northerly wall was built.

The Great Wall of China was built by soldiers, civilians, farmers and prisoners, primarily during three dynasties: the Qin, the Han and the Ming, although the Sui Dynasty and the Ten Kingdoms period also played a part. The building styles of each dynasty added their own flavour and advanced the techniques learned from the previous. 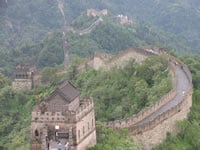 The first dynasty of China was the short lived Qin Dynasty. The first emperor, Qin ShiHuang, was a tyrannical emperor who unified China by force and set about constructing one Great Wall by joining. He even sent scholars to work on the Great Wall, anyone who was deemed unproductive. These workers faced arduous labor, and the constant danger of being attacked by bandits.

Most of early Great Wall was composed of weak stone, but when the natural stone in an area was not sufficient did that the engineers were turning to another method, there had to be used a rectangular frame that was filled with loose soil. This soil was trampled for several hours by a team of workers until this was solid. This process of landfill and to trample would be repeated again and again until the wall was reaching the wished height.

The second dynasty to add to the Great Wall was the Han Dynasty. The most notable contribution of the Han Dynasty is that they extended the Great Wall westwards through the Gobi Desert. Despite a lack of building materials, ingenious Chinese engineers found a solution. This method involved first laying down a layer of willow reeds, possibly woven.

Then a layer of gravel and a little water was applied and trampled solid. After the trampling, a new layer of reeds and gravel was added. This process would be repeated until the desired height was reached. Amazingly, some portions of this Great Wall are still standing, partly due to the dry conditions of the Gobi.

The last dynasty to build a northern wall was the Ming Dynasty (1368-1644). This dynasty built the biggest, longest, strongest and most ornate Great Wall ever. These are the walls that we are familiar with today. Their methods of Great Wall building fused all that was learned by the two previous dynasties. First, a center of trampled earth was created.

Then, around the firm center was applied a shell of stone and bricks. The bricks that were created by the Ming are so strong that they compare well with the ones we use today. The strong Ming wall was built across some of the most dangerous terrains in China, including steep mountains, sometimes on 75 degree inclines. It has been said that every foot of the construction of this Great Wall cost one human life.

The Ming Dynasty Great Wall starts on the eastern end at ShanHai Pass, near QinHuangDao, in Hebei Province, next to Bohai Sea. It once spanned 9 provinces and 100 counties, but the final 500 kilometers of the Great Wall to the west have all but turned to rubble. Along the Ming Great Wall of China there are many watchtowers, spaced from less than a kilometer to several kilometers or more apart. These were partly used to transmit military messages.

Fire and smoke were the most efficient means for communication; fire was used at night and smoke during the day. Straw and dung was used for this. In 1468, a series of regulations set specific meanings to these signals: a single shot and a single fire or smoke signal implied about 100 enemies, two signals warned of 500, three warned of over a 1000 and so on. In this way, a message could be transmitted over more than 500 km of the Great Wall within a few hours.