The Forbidden City is known also as the Palace Museum, the Gugong (in Chinese) Museum or the Purple Forbidden City. It is the largest and best preserved imperial palace in China.

This awesome palace is located in Beijing city to the north of Tiananmen Square (the ceremonial center of current Republic of China) and it was the official residence of the Chinese Emperor from the mid Ming Dynasty (1368 - 1644) until the last emperor of the Qing Dynasty (1644 - 1911). In total the Palace was the home of 24 Chinese emperors.

The Forbidden City is one of the five most famous palaces of the world together with the Palace of Versailles, the Buckingham Palace, the White House and the Kremlin. The Forbidden City was constructed as a replica of the Purple Palace where God lived according to the Chinese mythology therefore the palace was a sacred place, and so it was forbidden to the ordinary people.

The Forbidden City is the largest palace of the World. It occupied an area of 74 hectares. It is surrounded by a great moat of 6 meters deep and 10 meters high. The Palace is a giant rectangle of 961 meters long for 753 meters wide. The walls are 8.62 meters wide at the base and 6.66 meters at the top; they were designed as defensive walls and were made using rammed earth. The complex is composed by 980 buildings and around 8707 rooms.

The four corners of the great rectangle have each one an intricate tower with complex roofs that represents the Pavilion of Prince Teng and the Yellow Crane Pavilion. These towers are the elements most prominent from outside palace. The main entrance to the Forbidden City is through the Tiananmen gate.

Behind the Tiananmen gate is the great courtyard of the palace. Here the complex is divided into two parts: the inner court and the outer court (also called working area or front court). The courtyard contains some of the most representative elements of the palace: the “stream of golden water” and 5 beautiful bridges ornamented with carved torches.

The outer court was used mainly with ceremonial purposes and to host the imperial affaires. It is composed by all the buildings of the southern zone.

One of the most important rooms of the complex is the “Hall of Supreme Harmony” which is the largest in the palace and is 30 meters above the level of the surrounding square. This hall was the heart of the power in the country and is the largest wooden structure in China. The roof of this magnificent hall was decorated with a caisson with a coiled dragon.

The residence of the Emperor, his concubines and the Eunuchs of the palace was located in the inner court at the northern section of the complex in the central north-south axis of the complex, which was the most important axis of the three that compose the Forbidden City. In the inner are the main buildings that served as home for the imperial family such as the Palace of Heavenly Purity, the Palace of Earthly or the Hall of Union. All these palaces have an extraordinaire architectural style and were luxury decorated

All the elements from the architectural shapes to the colors used in the Forbidden City were designed to symbolize religious and philosophical principles of the Chinese cosmology. This Palace is the abstract of several millenniums of culture.

The construction of the palace was initiated in 1406 by the Yongle Emperor of the Ming Dynasty. The construction of the Forbidden City lasted around 15 years and almost one million workers were required to do this monumental work. The main materials used to build the palace were the Phoebe Zhenan (a fine Chinese wood) and marble blocks. The floors of the main halls were paved using golden bricks. 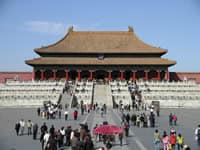 The palace was during over two centuries (1420- 1644) the residence of the Emperors of the Ming Dynasty. In 1644 a rebellion leaded by Li Zeching captured the Forbidden City and proclaimed Li Zeching emperor. But the rebels fled when an army leaded by the general Wu Sangui arrived with Manchu forces, during this fact some parts of the complex were burned.

Some months later the Manchu forces took the power in China and they proclaimed Shunzi Emperor starting the Qing Dinasty. The new dynasty made some changes in the palaces and renamed some buildings. Besides, the new Manchu Emperors introduce the Manchu language in Beijing.

The Forbidden City was captured again in 1860 when the Anglo-Forces occupied the palace during the Opium War II. The final episode to the Forbidden City as Imperial Palace occurred in 1912 when the last Emperor Puyi abdicated. Nevertheless Puyi remained in the inner Palace until 1924 because of an accord with the Chinese government. During this time many treasures of the Palace were sold by Puyi or were stolen.

From 1924 the Forbidden City became museum. But during the World War II because of the Japanese invasion, many of the treasures of the palace were evacuated by order of Chiang Kai-Sek to Taiwan. In 1961 the Forbidden city was listed by the Chinese government as one of the most important historical monuments under special preservation.

In 1987 the Forbidden City was declared World Heritage by UNESCO. Currently the Forbidden City is managed by an organism of the Chinese government “The Palace Museum”, which is executing a restoration project. Nevertheless, this administration has also taken controversial decisions, like to allow the presence of commercial enterprises such as Starbucks inside the Forbidden City.

This wonderful palace is without doubt today, the greatest symbol of the Imperial China in the capital of the country and it is together with the Great Wall the most representative Chinese national symbol.