The Temple of Heaven, literally the Altar of Heaven is a complex of Taoist buildings; the Temple of Heaven is situated in the southern part of Beijing about 6 Km away from the centre of the city. It is three times the area of the Forbidden City and smaller than the Summer Palace with an area of about 273 hectares.

The most wonderful buildings are The Circular Mound Altar (Yuanqiutan), Imperial Vault of Heaven (Huangqiongyu) and Hall of Prayer for Good Harvest (Qiniandian) from south to north.

The Circular Altar has three encrusted terraces with white marble. The Hall of Prayer for Good Harvest is a big palace, 38 meters in height and 30 meters in diameter, stands on a round foundation built with three levels of marble stones. Inside the Hall are 28 huge posts.

The roof is covered with black, yellow and green colored glaze representing the heavens, the earth and everything on earth. The Hall has a altar named Altar for Grain Prayers which is made of three layers of white marble and has a height of six meters. Another important building in Temple of Heaven is Imperial Vault of Heaven. The structure of it is like that of Hall of Prayer for Good Harvest, but smaller in size. The structure was made of bricks and timber.

The Vermilion Steps Bridge connects the Hall of Prayer for Good Harvest and the Imperial Vault of Heaven. The south end of the Bridge is lower than its north end. The emperors in the past believed that they could go to heaven through this Bridge, which is why this bridge is also called Sacred Way.

A Yu Route and a Wang Route are on two sides of the Sacred Way. The former one is only for the emperors to walk on and the later one is for the princes and the high officials to pass.

Besides carefully designed buildings, there are also some other scenes that you can enjoy like Nine-Dragon Cypress. It got its name from branches which look like nine dragons wind with each other. It was said that the cypress was planted more than 500 years ago.

The Temple of Heaven is a very popular park for exercising, and particularly for practicing taiji bailong ball, which is a paddleball variation of Tai Chi. Developed by Chinese Olympic boxing coach Bai Rong, taiji bailong ball is known as Rhythmball in North America.

The temple was constructed from 1406 to 1420 during the reign of the Yongle Emperor (Ming Dynasty) to offer sacrifice to Heaven, who was also responsible for the construction of the Forbidden City in Beijing 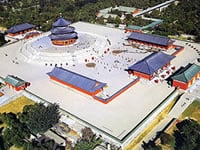 During each ceremony, the emperors worshipped heaven and prayed for a good harvest. In addition, the emperors also worshipped their ancestors and other natural phenomena such as the Cloud God, Rain God and Wind God.

The Temple of Heaven was inscribed as a UNESCO World Heritage Site in 1998 and was described as "a masterpiece of architecture and landscape design which simply and graphically illustrates a cosmogony of great importance for the evolution of one of the world’s great civilizations" as the "symbolic layout and design of the Temple of Heaven had a profound influence on architecture and planning in the Far East over many centuries".

It is regarded as a Taoist temple, although it is a temple to worship the heaven by the Chinese.

According to Xinhua, in early 2005, the Temple of Heaven underwent a 47 million Yuan (5.9 million USD) restoration in preparation for the 2008 Beijing Summer Olympics and the restoration was completed on May 1st, 2006.