In the north of China and a few hundreds kilometers away from Beijing, lies Datong, a small town in the province Shanxi. It is bordered by Inner Mongolia to the North and Hebei Province to the east. It covers an area of 14,176 square kilometers; it has four districts and seven counties under its prefecture. It is the second largest city in Shanxi Province with a population over 3.10 million of people. 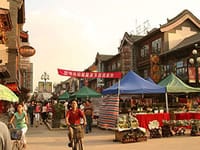 Also Datong is the second largest city in Shanxi, and is known by the locals as the City of the Coal, because coal is everywhere; Datong has developed into the second largest industrial city in Shanxi due to its advantage in energy. Its large reserves of coal make it a very important energy base for China. Since it is a key resource city, transportation connections with Datong are quite opportune, especially by road and by train. Series of railways and roads work as a huge net to connect Datong with many other cities.

It was the political, economic and military center of ancient North China, which attracted many people from various nations for trade or business. These prosperous days left Datong with a series of marvelous historic and cultural relics like the Yungang Grottoes and Hanging Monastery. Most of them are the integration of minorities' cultural and Han culture.

Datong has several other tourist attractions such as the 600 year old Nine Dragon Screen made of glazed tiles, the Huayan Monastery with the largest wooden shrine hall in China, and the Shanhua Monastery, intact since 713.

The Yungang Grottoes or Cloud Ridge Caves a collection of shallow caves located 16 km west of Datong. The Yungang Caves extend over the mountains that surround Datong with approximate one km in length. Emperors of various dynasties left Buddhas carved in stone in every imaginable size gives the impression that the statues are just a cave.

One of the largest collection of over 40,000 Buddhas, sizes vary from about 19 meters to the smallest of 2 cm. Witness different ages and different styles of each of the dynasties, each of the caves are completely covered by fresh color ornaments and sculptures.

The Hanging Temple is located approx. 75 kilometers outside of Datong. This temple, completely built from wood with narrow corridors and small altars, has been a well known place for pilgrims, who once traveled the country. The temple is the only of its kind in the surrounding area that unites the three religions Taoism, Buddhism and Laoism.

Datong has a monsoon and continental climate that make the city have a clear season difference. The average annual temperature is only about 6.8 ºC. The temperatures vary massively throughout the year, especially in the summer months of July and August, and a low of around -30 ºC in January and February.