The Yungang Grottoes are an ancient Buddhist temple; it is located in Datong city in the Chinese province of Shanxi, with their 252 caves and 51,000 statues; represent the outstanding achievement of Buddhist cave art in China of the 5th and 6th centuries.

The site is exactly located about 16 km south-west of the city, in the valley of the Shi Li River at the base of the Wuzhou Shan Mountains. The grottoes were mainly constructed in the period between 460 and 525 during the Northern Wei Dynasty.

The cave is an extraordinary sample of art that combines forms of traditional Chinese art with the foreign influence, especially the Greek and the Indian. The sculptures are a real work of art that with its vigorous features and a rich variety that range from the smallest of only 2 centimeters high to the tallest a Buda of 17 meters high.

The Yungang Grottoes are divided into three zones: east, west and central and numbered from east to west. Caves 1 and 2 contain carved pagodas. Cave 3 is the largest in this group, although it contains only a seated Buddha flanked by two Bodhisattvas.

The best of Yungang's art is reflected everything in the caves 5 and 6, where you can find carved in the walls wonderfully Buddhist tales. The cave 5 also contains to colossal based Buda almost 17m high place.

Cave 6 contains a splendidly carved pagoda, and an entrance flanked by fierce guardians. In the centre of the rear chamber stands a two-storey pagoda-pillar about 15m high. On the lower part of the pagoda are four niches with carved images, including one of the Maitreya Buddha(Future Buddha). Gautama Buddha's life story from birth to his attainment are carved in the east, south, and west walls of the cave and on two sides of the pagoda.

Caves 7 and 8 are linked and contain carvings with Hindu influences. Shiva, with eight arms and three heads, and seated on a bull, is on one side of the entrance to cave 8. On the other side is the versatile Indra, perched on a peacock. Caves 9 and 10 are notable for their front pillars and figures bearing musical instruments. These instruments appear again in cave 12, while cave 13 has a 15m high Buddha statue, its right hand propped up by a figurine.

These caves were carved in about AD 460 and the Buddha in each one represents an emperor from the Northern Wei dynasty. The Buddha in cave 18 represents Emperor Taiwu, who was once a great patron of Buddhism, but later came to favor Taoism.

Taiwu's grandson Emperor Wencheng, who restored Buddhism to the dynasty, is represented such as seated Buddha of 14m high in cave 20. The cave 21 and the others in forward are small, and there can not be compared with the others that are in better preserved. All together the site is composed of 252 caves with more than 51,000 Buddha statues and statuettes. The Five Caves created by Tan Yao, with their strict unity of layout and design, constitute a classical masterpiece of the first peak of Chinese Buddhist art.

After the decline of the Jin Dynasty, the northern parts of China came under the control of the Northern Wei dynasty, ruled by a proto-mongolic tribe called Tuoba. The Northern Wei early adopted Buddhism as their state religion. 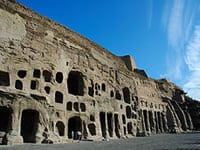 The construction of the caves was started under the auspices of the noted monk Tan Yao in 453 and took 50 years to complete. Some 40,000 people, including the Buddhists from what is present Sri Lanka, contributed to the huge project.

The work on this first period of carving lasted until the year 465 AD, and the caves are now known as caves 16–20. Beginning around the year 471 AD, in a second construction phase that lasted until 494 AD, the twin caves 5/6, 7/8, and 9/10 as well as the caves 11, 12, and probably 13 were constructed under the supervision and support of the imperial court. All other caves emerged under private patronage in a third construction period, lasting until 525, when the construction came to a final halt due to uprisings in the area.

Since the end of the works, the sandstone of the grottoes is exposed to heavy weathering. The ensuing centuries therefore saw several attempts to preserve the caves and to repair sustained damage. During the Liao Dynasty the caves saw some renewing of statues and the buildup of the "10 temples of Yungang" from 1049 to 1060 that were meant to protect the main caves. 1621, during the early Qing Dynasty, brought the construction of the wooden buildings that still can be seen in front of the caves 5 and 6. Since the 1950s, cracks in the sandstone have been sealed by grouting, and there are efforts to reduce the weathering due to sandstorms by forestation.

In 1965, the Datong municipal government issued and implemented the Programs for the Protection Scope and Safety of Yungang Grottoes. From 1973 to 1976, under the instruction of Premier Zhou Enlai, China injected a huge sum of money into the grottoes, rescuing many grottoes and caves that had been on the verge of collapse. A special Yungang Grottoes protection institution was set up in 1995, and in 1961, the State Council listed Yungang Grottoes as key cultural site under its protection.

In recent past ten years, the Datong municipal government has intensified its efforts to protect the Yungang Grottoes. In December 2001, the 25th meeting of UNESCO World Heritage Committee in Helsinki, Finland, passed a decision to list Yungang Grottoes on the World Cultural Heritage List.