Hangzhou is a sub-provincial city located in the Yangtze River Delta and is the capital of Zhejiang province; it’s a political, economic and cultural center. It is located 180 kilometers southwest of Shanghai. With its famous natural beauty and cultural heritages, Hangzhou is one of China's most important tourist venues.

Hangzhou lies close to the mouth of the Qiantang River at the western end of the Gulf of Hangzhou and only 180 kilometers from Shanghai. As one of the most renowned and prosperous cities of China for much of the last 1,000 years, Hangzhou is also well-known for its beautiful natural scenery, with the West Lake (Xī Hú) as the most well-known location.

As the capital (1132-1276) of the Southern Sung dynasty, Hangzhou was a famous cosmopolitan center of commerce and culture. Cultural relics can be found all over the city and suburb. Adding to its historical and cultural wonders, Hangzhou is also a renowned maker of fine silk, teas and traditional Chinese medicine. 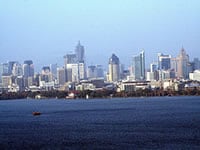 Hangzhou was a small fishing village until late in the sixth century, when the extension of the Grand Canal southward from the Yangzi led to the development of a busy commercial center in the town.

It prospered, especially during the peaceful early period of the Tang Dynasty. Its growth was assisted by the development of the lower Yangzi area into the nation's most important agricultural region.

Hangzhou has a subtropical monsoon type climate with four quite distinct seasons. However, it is neither too hot in summer nor too cold in winter making it a year round destination.

A number of national museums can be found in Hangzhou and are representative of Chinese culture. Fine examples are the National Silk Museum and Tea Museum. Along with the other museums in Hangzhou, they provide a fascinating insight into the history of Chinese traditional products.

Hangzhou dishes are noted for their elaborate preparation, sophisticated cooking and refreshing taste. Many local specialties will be sure to make your trip a cultural experience like Beggar's Chicken (a chicken baked in clay), West Lake Fish in Sweet Sour Source (vinegar coated fish fresh caught from the lake), Dongpo Pork (braised pork) and Fried Shrimps with Longjing Tea, etc.

The shopping environment in Hangzhou is exciting and convenient. Travelers and tourists like to go to Qing He Fang Street, one of the most famous and historic streets in the city and reflects many of the features of the Southern Song Dynasty (1127-1279).

At night Hangzhou has much to offer and teahouses and various kinds of pubs are both plentiful and popular. Choosing one overlooking the West Lake for a pleasant chat over a cup of tea is sure to make you feel totally relaxed and refreshed.

Hangzhou is a modern and vibrant economical center. As such it provides a base for many talented and skilled people. Never the less, thanks to its unique setting by the West Lake it continues to enjoy the many benefits of the natural surroundings that have delighted visitors for centuries.

Hangzhou may be overshadowed by some of the better known tourist destinations which boast amazing mountains, architectural masterpieces, golden beaches or exotic ethnic cultures. However, the city has an elegant air and a distinguished thousand year history.

Hangzhou is a noted ancient capital of China and is well-known for its West Lake and Grand Canal.