Some stories tell that the hanging gardens towered above hundreds of feet into the air but archaeological investigations indicate a more modest height, but still impressive to the time. The hanging Gardens did not really “hang “in the exact sense of being suspended from cables or ropes. The origin of the name is an inexact translation of the Greek word “kremastos” which mean “hanging”, but it means also “overhanging” such as a terrace or balcony.

The Greek Historian Strabo (first century BC) described the gardens with these words: “Babylon, too, lies in a plain; and the circuit of its wall is three hundred and eighty-five stadia (an ancient unit of distance). The thickness of its wall is thirty-two feet; the height thereof between the towers is fifty cubits (an ancient unit of measure); that of the towers is sixty cubits; and the passage on top of the wall is such that four-horse chariots can easily pass one another; and it is on this account that this and the hanging garden are called one of the Seven Wonders of the World.

The garden is quadrangular in shape, and each side is four plethra (an ancient unit of measure) in length. It consists of arched vaults, which are situated, one after another, on checkered, cube-like foundations. The checkered foundations, which are hollowed out, are covered so deep with earth that they admit of the largest of trees, having been constructed of baked brick and asphalt — the foundations themselves and the vaults and the arches.

The ascent to the uppermost terrace-roofs is made by a stairway; and alongside these stairs there were screws, through which the water was continually conducted up into the garden from the Euphrates by those appointed for this purpose. For the river, a stadium in width, flows through the middle of the city; and the garden is on the bank of the river”.

Another Greek historian named Diodorus Siculus tells that the gardens were around 400 feet wide by 400 feet long and almost 80 feet high. Garden´s height is very controversial, since Herodotus said it was 320 feet high, but this point seems too exaggerated

Other source described the hanging gardens as follows: "The Hanging Garden has plants cultivated above ground level, and the roots of the trees are embedded in an upper terrace rather than in the earth. The whole mass is supported on stone columns... Streams of water emerging from elevated sources flow down sloping channels... These waters irrigate the whole garden saturating the roots of plants and keeping the whole area moist. Hence the grass is permanently green and the leaves of trees grow firmly attached to supple branches... This is a work of art of royal luxury and its most striking feature is that the labor of cultivation is suspended above the heads of the spectators".

The homeland of Amytis was green, rugged and mountainous; therefore when the new queen arrived to Babylon, she was depressed because this city is over a flat sun-baked terrain. The intention of Nebuchadnezzar was to recreate the homeland of his wife building an artificial mountain with rooftops gardens. 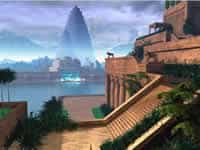 Nevertheless, many modern historians doubt about the existence of these gardens. One of the reasons to doubt is that there are not Sumerians tablets of the Nebuchadnezzar’s time which reference to the famous gardens. Altough there are several descriptions of the palace and the city in the government of this king. This fact is very bizarre, since if Greeks wrote so much about this wonder; it would be logical that hanging gardens’ creators write much more about them. Besides, there are not vestiges of the gardens in the archaeological excavations realized in the location where scientists believe, ancient Babylon was.

According to modern historians a possible explanation would be that the soldiers of Alexander the Great were very impressed when they saw the fertile and amazing land of Babylon; therefore when soldiers returned to Greece; they recounted stories about incredible gardens with palms and trees and higher ziggurats; which inspired the imagination of the Greek poets, who created the legend of one of the Seven Wonders of the ancient world.

Besides, archaeological excavations in Iraq have found vestiges of a building with vaults, but this location is quite far from the supposed location, where Greek historians placed the gardens on the banks of the Euphrates River.

Another theory proposes that the hanging gardens would be constructed by Sennacherib who was king of Assyria from 705 to 681 BC and they would be located in Nineveh on the bank of the Tigris River. Recent excavations which have found vestiges of ancient gardens placed near the entrance to a palace support this idea. According to this theory because of the centuries, the real location of the gardens would have been confused.