The Mount Everest, the highest mountain on earth with 8.848 meters above sea level, is part of the Himalaya range in High Asia and is located on the border between Sagarmatha Zone, Nepal and Tibet, China. It is called Sagarmatha, Chomolungma, Qomolangma or Zhumulangma. Name in Nepal is Sagarmantha which means “goddess of the sky” and the name in Tibet is Chomolungma which means “mother goddess of the universe”.

Around 1856 when the Great Trigonometric Survey of India established the height of Everest 8,840 m, the mount was known as Peak XV. In 1865 upon recommendation of Andrew Vaugh, the British Surveyor General of Indi, the English name was official “Everest”. He was unable to purpose a local name in common for Nepal and Tibet people however Chomolungma had been use by Tibetans for centuries.

The Mount Everest attracts climbers of all levels, from experienced to novice climbers which willing to pay substantial sums to professional mountain guides to complete a successful climb.

The mountain still has many inherent dangers such as altitude sickness, weather and wind. In spite of that information by the end of the 2007 climbing season, there had been 3679 ascents to the summit by 2436 individuals, which this means climbers are a significant source of the Nepal tourism.

The government requires to prospective climbers to obtain an expensive permit, coasting up to $25,000 per person. Everest has claimed 210 lives, including eight who perished during a 1996 storm high on the mountain.

The discovering occurs when the British began the Great Trigonometric Survey of India to determine the location and names of the highest mountains, using giant theodolites (500kg) around 1808.

They reached the Himalayan foothills by the 1830s in spite of Nepal was unwilling to allow them to enter the country due to suspicious of political aggression and a possible annexation, so several requests by the surveyors to enter Nepal were turned down.

They were forced to continue their observations from Terai a region south of Nepal, but the conditions were difficult due to torrential rains and malaria, three survey officers died from malaria and the two others had to retire due to health hazard. 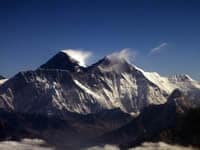 In 1847, Andrew Waugh made a number of observations from Sawajpore station at the time Kangchenjunga was considered the highest peak in the world. He noted a peak beyond it, some 230km away, but he doesn’t the only one John Armstrong, one of the officials saw the peak and called it peak “b”.

However due to the great distance of the observations, closer observations were required for verification. The next year clouds thwarted all attempts to make closer observations of peak “b”. Finally then numerous calculations in March 1856 Waugh declared to Kangchenjunga with 8582m and Peak XV was given the height of 8840m and concluded that the mountain was most probably the highest in the world.

The next challenge was clearly name the peak, the survey was anxious to preserve local names (Kangchenjunga and Dhaulagiri where local names) but Waugh argued that he was unable to find any commonly used local name because it was hampered by Nepal and Tibet being closed to foreigners at the time. Chomolungma was the best known local name in Tiber for several centuries but many local names existed too.

Waugh argued that would be difficult to favour one specific name over plethora of local names and he decided that Peak XV should be named George Everest such as his predecessor as Surveyor General of India. But George Everest opposed the name suggested and told the Royal Geographical Society in 1857 that Everest could not be written in Hindi nor pronounced by “the native of India”.

However the name prevailed despite the objections and in 1865 the name was officially adopted “Mount Everest” for the highest mountain in the world by the Royal Geographical Society.

Actually there are two main climbing routes, the southeast ridge from Nepal and the northeast ridge from Tibet as well many others less frequently climbed routes. The first route is technically easier, more used by climbers and it was the route used by Edmund Hillary and Tenzing Norgay in 1953, the first recognized of fifteen routes to the top by 1996.