The Jagannath Temple located in the coastal town of Puri at a distance of 60km from Bhubaneswar, on the coast of Bay Bengal, Orissa state. It is dedicated to Jagannath (Krishna) which means the Lord of Universe, a combination of the Sanskrit words Jagat (Universe) and Nath (Lord of). Soaring up to a height of 65metres, the temple is a predominating landmark of the city. Non doubt it is an epitome of The Orissan style architecture.

In addition to Lord Jagannath, his brother Balabhadra and his sister Subhadra are also worshipped here in the centre of the temple. But other deities of the temple are Sudarshan, Madhaba, Sridevi and Bhudevi. 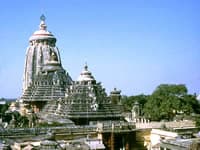 The most renowned between the biggest temples of Orissa, was built approximately 12th century AD by King Chodaganga of the Eastern Ganga dynasty. The completion was later brought about by his descendant, Anangabhima Deva, during the 12th century. The wooden images of Jagannath Balabhadra and Subhadra were installed here. Until 1558, the management of the temple continued under Hindu rulers, when the Orissa state was conquered by the Afghan Nawab of Bengal and the temple was attacked by the Afghan General Kalapahad. Then the General of Mughal King Akbar, Raja Mansingh defeated the Afghans and annexed Orissa into the Mughal dominion till 1751 AD. Some years later Marhattas tood the management till 1803, when the Britishers annexed Orissa into British empire and allowed Puri Raja to manage the temple. The position continued until 1947.

The legend said that King Indradyumma saw Lord Jagannath in his dreams and following the Lord’s wishes, as told to him in his dreams, he got the Jagannath Temple constructed. The temple situated in the heart of the holy city is visited by devotees from farthest corners of India as well as the entire world. Its embellished walls with exquisite carvings and its tall spires make it magnificent. The pillars are adorned with pictures depicting the life of Lord Krishna.

One of the most popular attractions of the Jagannath temple of Puri comprises its Rath Yatra, organized every year. Basically it is a chariot festival where the main deities of Srimandir are taken to the Gundicha temple in bejewelled chariots and are brough back to the mandir in the same way.

The Jagannath temple is counted among the finest monumental wonders due to its brilliant architecture. The complex covers an area of 10.7 acres, the shrine encloses 20 feet high wall, and a pillar with 11m high at the main entrance has 16 sides. The temple is divided into four chambers: Bhogmandir, Natamandir, Jagamohana and Deul. Natamandir is a multi-pillared hall and is reserved for music and dance functions. Jagamohana is the hall where devotees gather for worshippong and Deul hols de deities.

The architecture follows the pattern of many Orissan temples of the classical period. The main tower or shikhara rises above the inner sanctum where the deities reside. The complex is surrounded by wall on each side is a gate or gopura and over which rised a pyramid-shaped roof. The largest temple covering several square blocks with dozens of structures including a mammoth kitchen.

The main temple structure is built on elevated ground and enclosed by two rectangular walls. The outer enclosure is called Meghanada Prachira, 200m by 192m. The inner enclosure is called Kurmabedha, 126m by 95m. The walls are 6m high and were built around 15th or 16th century on which the flag and the wheel of Lord Vishnu can be seen. Jagannath Temple has four entrances namely – the Eastern Singhadwara (Lion Gate), the Western Vyaghradwa (Tiger Gate), the Southern Ashwadwara (Horse Gate) and the Northern Hastidwara (Elephant Gate). There is a carving of each form by the entrance of each gate.

The main entrance is known as the Lion Gate which is guarded by two stone lions. In front of it a magnificent pillar that is topped by an idol of the Garuda. There is a carving of each form by the entrance of each gate. The Lion Gate, which is the main gate, is located on Grand Road. A pillar of 11m high is in front of the main gate called Aruna Stambha. Atop these pillar a figure of Aruna, the charioteer of the Sun God, is founded. In the centre visitors can see the images of Lord Jagannath, Balbhadra and Subhadra.

Nila Chakra or Blue Wheel, on top of the Jagannath Temple, is made of an alloy of eight metals with 3.5m high and a circumference of about 11m. Every day, a different flag is tied to a mast attached to the Nila Chakra. Every Ekadasi, a lamp is lit on top of the temple near the wheel.

People who are non-Hindus or non-believers are not allowed inside the temple but they can look down into the temple from the roof of the Raghunandan Library, located opposite the main entrance to the temple.

Thirty different smaller temples surround the main temple. The Mahalakshmi temple has an important role in rituals. It is said that preparation of food as offering for Jagannath is supervised by Goddess Mahalakshmi.