Bali is a beautiful Island in Indonesia known as the “Island of the Thousand Temples” or the “Island of the Gods”, because of the great number of wonderful Hindu temples there are in the Island. It says that Bali has more temples than houses. Each village of Bali has several temples. Besides, each home in the Island has its own small temple. All Bali temples have a special orientation from the mountains and the sea.

Usually the temples of Bali are ornamented with an impressive and intricate set of carvings, mainly on the gateways. Besides, almost always a couple of magnificent stone statues are always saving the temples.

According to the Balinese tradition, the temples are the point of meeting amongst the humans and the gods. The temples are specially considered during some festival days or in the “odalan” (temple anniversaries). In these dates the temples are decorated to praise the gods. The word in Sanskrit for temple is “Pura”, which means “space surrounded by walls”.

In Bali each thing or activity has its own temple, there are village temples, family temples, rice fields temples, temples for animals, etc. Nevertheless the bigger Hindu temples on Bali are used only in special occasions.

Most temples of Bali can be classified into these categories: Pura Puseh (origin temples), which are the most important and are reserved to the founders of villages (Balinese are worshipers of their ancestors). Pura Desa dedicated to protector spirits that guard the villagers. Pura Dalem (dead temple), where is venerate Durga the Shiva’s wife and deity of the dark and destruction.

Besides, there are several temples dedicated to the spirits that protect the agriculture, these temples are known as Pura Subak.

However, there are around 50 largest temples and only some of them are considered the most important of Bali, amongst them are:

Pura Tanah Lot, it is an impressive temple near the village of Beraban to 13 Km of Tabanan. The temple is suspended on a huge black volcanic rock in middle of the sea. The temple has only one tower and it is decorated by foliage spilling over the cliffs. The image of this temple remembers a beautiful Japanese bonsai. Tanah Lot like most sea temples of Bali is dedicated to the guardian spirits of the sea. According to the chronicles this wonderful temple was constructed by the priest Nirartha in the XIV century. It can walk to the temple only when the tide is low. This temple is opened only to Hindus and is closed for tourists.

Pura Besakih, it is the most important and holiest temple of Bali. It was originally dedicated to the god Gunung Agun (the mountain) since pre historical times. Currently the temple is a religious complex composed by around thirty sanctuaries; most of them were constructed between XIV and XVII centuries. An important feature of the temple is the great number of Merus (wooden buildings with pagodas as roofs). This temple was also a center of political power, between I and V centuries, the temple was the palace of the Geigel- Kiungkung dynasty. Now this temple is considered the “Mother Temple” of Bali and is very respected by all Bali citizens. The paramount sanctuary of the temple is the Pura Panataran Agung. The main inside patio hosts the Trisakti shrine, which is dedicated to the Hindu trinity of Brahma, Visnu and Siwa , which is very honored during the festivals that is also the most amazing time to visit the temple .

Pura Kehen, it is located at the south slope of Bangli hill, is one of the oldest temples of Bali. The temple saves some ancient manuscripts made on bronze. This sanctuary is the second largest temple of Bali. There are three patios in the temple, which are decorated with statues, wonderful carvings and are connected by stairs. Pura Kehen was founded in the XI century by Cri Brahma Kenuti Ketu. One of the most representative elements of the temple is old Banyan tree that is in the second courtyard.

Pura Ulun Danu Batur, it is located in the Batur village in the Kintamani district. It is the second most important temple of Bali after Pura Besakih. The temple is situated in a beautiful location at the Batur Lake at the foot of the Gunung Batur Volcano. The religious complex is composed by nine sanctuaries dedicated to Hindu gods like the goddess of the Batur lake, Dewei Danu or the God of the mountain Batu. The original temple was built in the XI century; unfortunately it was destroyed by a volcanic eruption in 1926. The current temple was reconstructed by the local people and has a notorious Chinese influence in its architectonic style.

Pura Uluwatu, it is another wonderful temple that combines perfectly the human art with the beauty of the nature. It is located at the western of the Bukit Peninsula. The temple is constructed at the top of a cliff 90 meters over the sea. There are not accurate registers about the age of this temple, but it is one of the most ancient of Bali. Pura Uluwatu like Tanah Lot is dedicated to the sea deities. The access to the temple is only allowed one at a time. Pura Ulawatu has three inner courts which are surrounded by coral stone. Besides, both the front and the inside halls are ornamented with stylized birds.

There are many other temples in Bali such as Lempuyang, Goa Lawah, Makori, Watukaru, Jagadnahata, Maospahit, Tirta Empul, Pengerebogan, Andakasa, Masceti, Sakenan, Dalem, Ubud’s Pura Taman Saraswati,etc. All of them are great architectural gems and each one has something unique to offer. Therefore the countless and amazing temples of Bali are considered all together, one of the great man-made wonders.

The Island of Bali was initially inhabited for people from the Maritime Southeast Asia. But the greatest cultural influence arrived from India since the first century AD. Oldest temples of Bali were constructed from 913 AD such as Pura Ulun Danu Batur, Pura Kehen, Gunungkawi, amongst other. 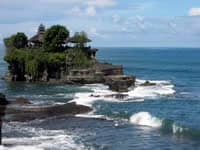 The Hindu influence in Bali was major between 1293 and 1520 when the Hindu Majapahit Empire founded a colony in Java; but when this colony declined; the intellectual and political elite migrate to Bali, further consolidate the Hindu influence in the region. Temples like Tanah Lot were built in this historical period, during which, many Hindu priests arrived to Bali.

At the beginning of the XVI century began a period of cultural independence in Bali because of the Migration of the Majapahit Empire towards east. During this time several other temples were constructed in Bali, but with an style some different. Several parts of the Besakih temple, were built in this period as well as the Sangeh Monkey Sanctuary.

Now, the temples of Bali are still important places of worship. Most temples of the Island are scenario every year of colorful religious festivals. Usually people carry offerings to the temple to honoring the three gods of the Hindu trilogy. These offerings consist of palm leafs, flowers and foodstuffs.

All these offerings represent in the Hindu cosmology to Siwa (Shiva), whereas the holy water represents to Wisnu and the incense represents to Brahama. The temples of Bali have still a very important role in the historical development of the region.